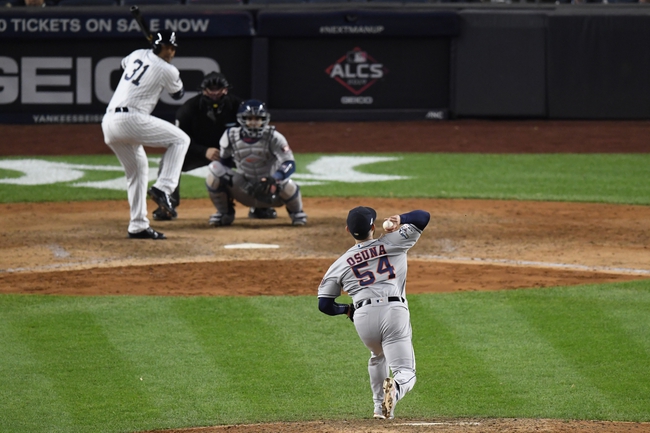 The Houston Astros and New York Yankees meet Friday in game five of the ALCS at Yankee Stadium.

The Houston Astros will advance to their second World Series in the last three years with a victory here. The Astros got their offense going in the game four victory, scoring eight runs and they’re now 6-2 this postseason when scoring at least one run. The Houston Astros have won 13 of their last 14 games when scoring four or more runs. Jose Altuve leads the Astros with 13 hits and six RBI while Michael Brantley and Alex Bregman have combined for 18 hits and five RBI. Justin Verlander gets the ball, and he was 21-6 with a 2.58 ERA and 300 strikeouts this season. Verlander is 14-8 with a 3.18 ERA and 187 strikeouts in his postseason career.

The New York Yankees need a win here to save their season and force a game six on Saturday. The Yankees have looked lost offensively since their game one victory, scoring a combined six runs in their last three games. The New York Yankees have lost 10 straight games when scoring less than five runs. DJ LeMahieu leads the Yankees with 11 hits and four RBI while Gleyber Torres and Aaron Judge have combined for 17 hits and 12 RBI. James Paxton gets the ball, and he was 15-6 with a 3.82 ERA and 186 strikeouts this season. Paxton is 0-0 with a 5.14 ERA and 11 strikeouts in his postseason career.

I'm honestly not sure why the Houston Astros are underdogs with Verlander on the mound, a guy who has been lights out all season long, and the Astros have lost just six games with him on the mound since July. Yes, Verlander hasn't been as sharp this postseason and his numbers can dip on the road, but he's still one of the top pitchers in the game. Paxton has been much improved these last two months, but he's not Verlander. Also, the New York Yankees offense looks lost, as guys are hacking away with no confidence and they're not hitting with guys in scoring position. I had the Yanks winning this series, but this isn't the same team we saw all year and they look defeated in terms of body language. I'll be rooting for the Yankees to turn things around, but I can't turn down the plus money with the Astros.