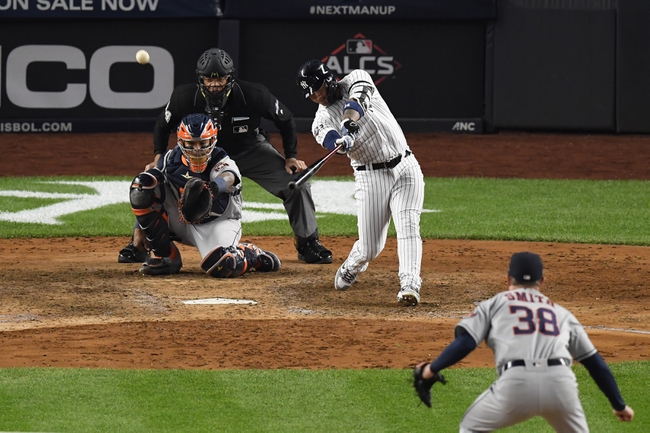 The Houston Astros and the New York Yankees meet in game four of the ALCS in MLB action from Yankee Stadium on Thursday night.

The Houston Astros will look to forge ahead and take a stranglehold of this series after going up 2-1 with a 4-1 victory in game three on Tuesday. Jose Altuve and Josh Reddick each had a solo home run while Yuli Gurriel added an RBI. Martin Maldonado had a double while Michael Brantley went 2 for 4 at the dish to finish off the Astros’ offense as a team in the winning effort. Gerrit Cole got the win after tossing seven shutout innings, giving up just four hits while walking five and striking out seven. Roberto Osuna threw a perfect 9th inning for his 1st save of the postseason. Zack Greinke will start game four and is 0-2 with an 8.38 ERA and 11 strikeouts this postseason.

The New York Yankees will look to bounce back after falling behind in the series with their defeat in game three on Tuesday. Gleyber Torres’ home run was the lone RBI that the Yankees would plate in the losing effort. Edwin Encarnacion had a double while DJ LeMahieu went 2 for 5 and Aaron Judge added a base hit as the Yankees had just five hits as a team in the loss. Luis Severino ended up with the loss, falling to 0-1 after giving up two runs on five hits while walking three and striking out six over 4.1 innings of work. Masahiro Tanaka is expected to start game four and is 2-0 with a 0.82 ERA and 11 strikeouts this postseason.

I had originally went with the Yankees prior to the postponement under the assumption that Jose Urquidy was getting the start for the Astros. However, while he hasn't been performing like the ace-type pitcher that Houston was expecting to receive, Greinke is still a solid arm and the wins have still been coming in for Greinke for the most part. Tanaka has performed well this postseason, including six shutout innings against the Astros in game one, but Houston's been the better team in the last two games of the series and getting Greinke and Houston at plus money like this is too good to pass up on.