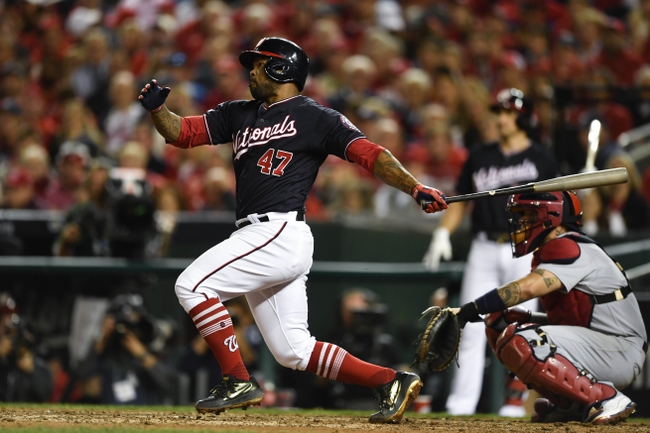 The St. Louis Cardinals and the Washington Nationals meet in game four of the NLCS from Nationals Park in MLB action on Tuesday night.

The St. Louis Cardinals will look to pick up a win to get on the board and fight another day after going down 3-0 in the series with an 8-1 loss in game three on Monday. Marcell Ozuna went 2 for 4 with a double while Jose Martinez and Paul DeJong each had two hits as well. Yadier Molina added a base knock as well to cap off the Cardinals offense as well in the losing effort. Jack Flaherty ended up with the loss after allowing four runs on five hits while striking out six over four innings of work. Dakota Hudson will start game four and is 0-0 with a 1.93 ERA and 2 strikeouts this season. In his career, Hudson is 2-1 with a 2.93 ERA and 11 strikeouts against Washington.

The Washington Nationals will look to complete the sweep and push ahead to the World Series after taking game three on Monday. Howie Kendrick led the Nats with three doubles and three RBIs while Ryan Zimmerman went 2 for 4 with a double and two RBIs. Victor Robles had a solo home run while Anthony Rendon went 2 for 3 with a double and an RBI and Adam Eaton chipped in an RBI of his own to round out Washington’s scoring as a team in the win. Kurt Suzuki added a base hit of his own to finish off the Nationals’ offense. Stephen Strasburg got the win after giving up just an unearned run on seven hits while striking out 12 over seven innings of work. Patrick Corbin will start game four and is 0-1 with a 7.56 ERA and 14 strikeouts this postseason. In his career, Corbin is 2-2 with a 4.17 ERA and 44 strikeouts against St. Louis.

I think you can make a case for St. Louis with their backs up against the wall and Hudson has been arguably their most consistent starter this season while Corbin was roughed up in his lone appearance at home this postseason. However, the Nationals have easily been heads and shoulders the better team through the first three games of the series, and Corbin was a better pitcher at home than on the road this season, boasting a 2.40 ERA in the regular season, giving up just a .199 batting average against at home. I just think that Washington is a team on a mission right now and as such, I’ll side with the Nationals to get the win here and complete the sweep to advance.