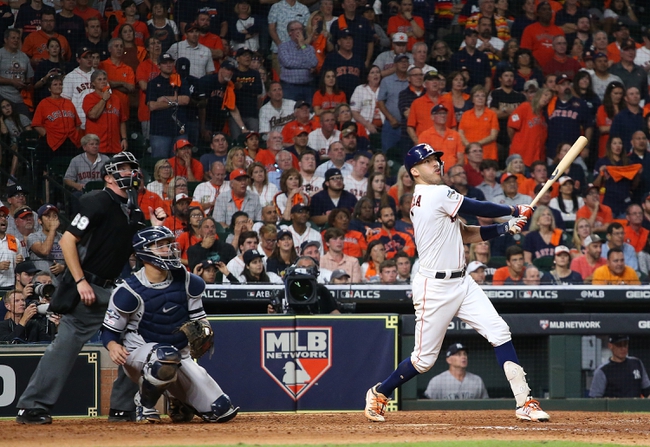 Where to Watch: FS-1 Stream the MLB Game of the Day all season on ESPN+. Sign up now!

The Houston Astros and the New York Yankees meet in game three of the ALCS from Yankee Stadium in MLB action on Tuesday.

The Houston Astros will look to take back home field after settling for a split through the first two games of the set with a 3-2 win in extra innings in game two on Sunday. Carlos Correa went 2 for 5 with a home run, a double and two RBIs while George Springer had a solo home run to round out Houston’s scoring as a team in the win. Jose Altuve went 2 for 4 while Michael Brantley and Alex Bregman each chipped in a base hit as well to finish off the Astros’ offense. Justin Verlander gave up two runs on five hits while striking out seven over 6.2 innings of work, not factoring in the decision. Josh James got the win in relief for his first win of the postseason. Gerrit Cole will start game three and is 1-0 with a 0.57 ERA and 25 strikeouts this postseason. In his career, Cole is 1-0 with a 4.15 ERA and 14 strikeouts against the Yankees.

The New York Yankees will look to rebound at home after a heartbreaking loss in game two on Sunday. Aaron Judge belted a two-run home run to account for all of New York’s scoring in the loss while Brett Gardner went 2 for 5 at the dish. DJ LeMahieu, Gleyber Torres and Cameron Maybin each had a hit as the Yanks had just six hits as a team in the losing effort. J.A. Happ ended up with the loss in the extra innings after giving up the walk-off home run with the first pitch of the bottom of the 11th inning. Luis Severino will start here and is 0-0 with a 0.00 ERA and 4 strikeouts this postseason. In his career, Severino is 2-1 with a 3.86 ERA and 33 strikeouts against Houston.

New York and the decent plus money at home is tempting considering that the Yankees are probably really frustrated with how things went down in game two and will be out for blood at home. However, I think this line honestly speaks to how dominant Gerrit Cole has been lately, and not only in the postseason, but we’re talking about a pitcher who hasn’t take a loss since Late-May, and the Astros have only lost two of Cole’s starts since May 27th. Severino is probably going to only go four innings max here, and that puts a lot of pressure on a Yankee bullpen that’s already taxed from a heavy workload in game two. The injuries are going to catch up to New York soon, and I think this is where it starts so I’ll lay the juice with Houston on the road in this one.