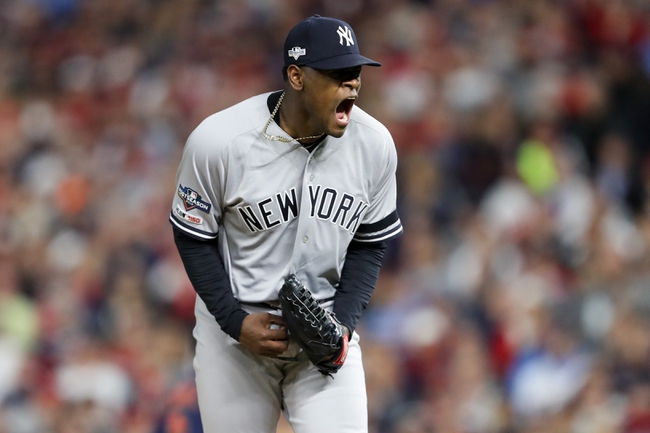 The Houston Astros and New York Yankees meet Tuesday in game three of the ALCS at Yankee Stadium.

The Houston Astros look to regain control of this series after winning game two in extra innings. The Astros pitching got back on track in their game 2 victory, but the offense has still been held to three or less runs in five of their last six games. The Houston Astros need to wake the bats up if they’re going to have success in the Bronx. Jose Altuve leads the Astros with 10 hits and five RBI while Alex Bregman and Yordan Alvarez have combined for 13 hits and four RBI. Gerrit Cole gets the ball, and he was 20-5 with a 2.50 ERA and 326 strikeouts this season. Cole is 4-3 with a 2.62 ERA and 56 strikeouts in his postseason career.

The New York Yankees look for a big home win to take a 2-1 series lead. The Yankees had their chances to steal another road win but couldn’t put together the big hit to close the deal, leaving the door open. The good news is that the New York Yankees return home where they scored 18 runs in two wins over the Minnesota Twins and have scored seven or more runs in seven of their last 10 tries. Gleyber Torres leads the Yankees with nine hits and nine RBI while DJ LeMahieu and Aaron Judge have combined for 13 hits and six RBI. Luis Severino gets the ball, and he was 1-1 with a 1.50 ERA and 17 strikeouts this season. Severino is 1-2 with a 5.33 ERA and 25 strikeouts in his postseason career.

Cole has allowed 26 hits and six earned runs in his last 57.2 innings, and he has a 2.36 ERA and .199 allowed batting average on the road. Severino has allowed 10 hits and two runs in his 16 innings pitched this season and threw 83 pitches in his game three win over the Minnesota Twins. As great as Cole has been and the fact the Astros haven't lost with him on the mound since July 12, the Yankees are a different animal at Yankee Stadium where they often put up crooked numbers regardless of pitcher, and that crowd makes for a hostile environment. I believe the Yankees batting order can put up runs against anybody, and they've proven that to be the case at Yankee Stadium. Severino has also been money in his small sample size of a season. I had the Yanks winning this series before it started and that crowd does wonders. I'm not stepping in front of the Yankees.