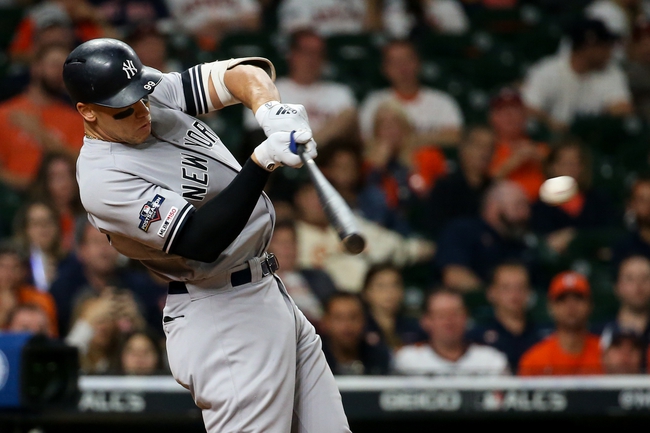 The New York Yankees and the Houston Astros meet in game two of the ALCS from Minute Maid Park on Sunday in MLB action.

The New York Yankees will look to head back home with a 2-0 stranglehold on the series after taking game one on Saturday by a final score of 7-0. Gleyber Torres went 3 for 5 with a homer un, a double and five RBIs while Giancarlo Stanton and Gio Urshela each went 2 for 4 with a solo home run to make up New York’s scoring as a team in the win. DJ LeMahieu and Aaron Judge each had two hits while Gary Sanchez and Didi Gregorius each had a base knock to cap off the Yankees’ offense as a team in the win. Masahiro Tanaka got the win after throwing six shutout innings, giving up just one hit while striking out four on the way to the win. James Paxton will start game two and is 0-0 with a 5.79 ERA and 8 strikeouts this postseason. In his career, Paxton is 8-4 with a 3.24 ERA and 81 strikeouts against Houston.

The Houston Astros will look to rebound after dropping game one in disappointing fashion on Saturday. Michael Brantley, Jose Altuve and Kyle Tucker each had a base hit as the ‘Stros mustered up just three this as a team in the losing effort. Zack Greinke took the loss after allowing three runs on seven hits while striking out six over six innings of work. Justin Verlander will start game two and is 1-1 with a 3.38 ERA and 13 strikeouts this postseason. In his career, Verlander is 8-7 with a 3.55 ERA and 135 strikeouts against the Yankees.

It’s honestly hard to go against Houston at home with a reasonable line and Justin Verlander on the mound. However, there’s too much value here with the Yankees to pass on. The Yankees just looked like the much better team in game one while Houston looked absolutely lifeless. That may not happen again, but we’re getting some quality plus money with a Yankees team that can put runs on the board with the best of them, starting a hurler in Paxton who has won his last ten starts and the Yankees haven’t lost with him on the mound since the end of July. Verlander is still a solid arm, but he is still coming off of that ugly outing against the Rays in the ALDS and I just think that the Yankees need to take advantage of these spots when they can so I’ll take a shot with New York and the plus money here.