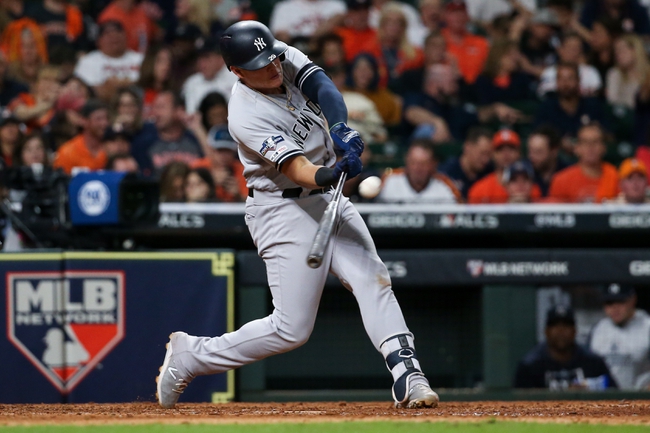 The New York Yankees and Houston Astros meet Sunday in game two of the ALCS at Minute Maid Park.

The New York Yankees can take complete control of this series with a win and a 2-0 lead heading back to the Bronx. The Yankees got a gem from their pitching staff and the offense showed up as well in game one, scoring seven runs and producing 13 hits. The New York Yankees have won 24 of their last 28 games when scoring four or more runs. DJ LeMahieu leads the Yankees with four hits and four RBI while Edwin Encarnacion and Gleyber Torres have combined for nine hits and six RBI. James Paxton gets the ball, and he was 15-6 with a 3.82 ERA and 186 strikeouts this season. Paxton is 0-0 with a 5.79 ERA and eight strikeouts in his postseason career.

The Houston Astros need a victory here to even things up and improve their chances of advancing. The Astros just couldn’t get anything going offensively, and they’ve now been held to three or less runs in four of their last five games. The Houston Astros have split their last eight games when scoring three or less runs. Jose Altuve leads the Astros with seven hits and five RBI while Carlos Correa and Yuli Gurriel have combined for nine hits and five RBI. Justin Verlander gets the ball, and he was 21-6 with a 2.58 ERA and 300 strikeouts this season. Verlander is 14-8 with a 3.20 ERA and 180 strikeouts in his postseason career.