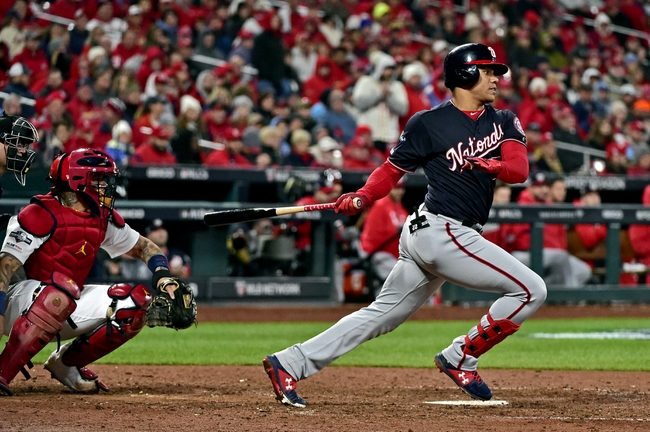 The Washington Nationals and the St. Louis Cardinals meet in game two of the NLCS in MLB action from Busch Stadium on Saturday.

The Washington Nationals will look to take charge of the series after opening the set with a 2-0 win in game one on Friday. Howie Kendrick and Yan Gomes each had two hits with a double and an RBI to make up Washington’s scoring as a team in the win. Ryan Zimmerman went 2 for 4 with a double while Adam Eaton had a triple. Trea Turner, Anthony Rendon and Juan Soto each had a base hit to cap off Washington’s offense as a team in the victory. Anibal Sanchez got the win after tossing 7.2 innings of one hit shutout baseball, striking out five in the winning effort while Sean Doolittle retired the final four batters for his 1st save of the postseason. Max Scherzer will start game two and is 1-0 with a 1.13 ERA and 10 strikeouts this postseason. In his career, Scherzer is 2-6 with a 3.31 ERA and 86 strikeouts against St. Louis.

The St. Louis Cardinals will look to bounce back after being stifled in game one. Jose Martinez’s base knock in the 8th was the lone hit that the Cards would register in the losing effort with the rest of the Cardinals batting 0 for 28 with 6 strikeouts as a team in the losing effort. Miles Mikolas ended up with the loss after allowing just one run on seven hits while striking out seven over six innings of work. Adam Wainwright will start game two and is 0-0 with a 0.00 ERA and 8 strikeouts this postseason. In his career, Wainwright is 10-4 with a 3.10 ERA and 88 strikeouts against Washington.

You could make a strong case for St. Louis and the plus money here as going down 0-2 on the road would be a hard hole to dig out of, and Wainwright has had success against Washington in his career and has been solid at home this season. Scherzer’s also had issues against the Cardinals in his career. However, I just trust the Nationals with their ace on the mound than I do St. Louis, as the offense just disappeared from the Cardinals from that solid performance in game five to game one on Friday. I wouldn’t be surprised with either result here, but I’ll side with Washington in another low-scoring tight affair to put the Cardinals on the hot seat.