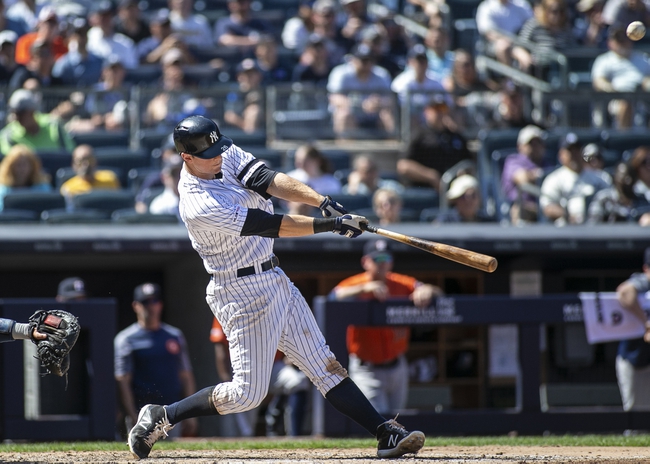 The New York Yankees and the Houston Astros meet in game one of the ALCS from Minute Maid Park in MLB action on Saturday.

The New York Yankees will look to come in and steal home field after having some time to rest following their sweep of Minnesota in the ALDS with a 5-1 win in their last outing. Didi Gregorius went 2 for 4 with two RBIs while Cameron Maybin and Gleyber Torres each had a solo home run with Torres going 3 for 4 with a pair of doubles. Brett Gardner added an RBI as well while Gio Urshela added a double. Gary Sanchez and Giancarlo Stanton each had a base hit to cap off New York’s offense as a team in the victory. Luis Severino threw four shutout innings in the start, giving up four hits while striking out four, not factoring in the decision. Chad Green got the win in relief while Aroldis Chapman picked up his 1st save. Masahiro Tanaka will start game one and is 1-0 with a 1.80 ERA and 7 strikeouts this postseason. In his career, Tanaka is 0-2 with a 6.62 ERA and 25 strikeouts against Houston.

The Houston Astros will look to build on an emotional win in Thursday’s winner-take-all game five against Tampa Bay, defeating the Rays by a final score of 6-1. Jose Altuve and Alex Bregman each had two RBIs with Altuve going 2 for 4 with a home run while Bregman had a double. Michael Brantley went 2 for 3 with a solo home run while Yuli Gurriel had an RBI of his own to cap off Houston’s scoring as a team in the victory. George Springer and Josh Reddick each had a base hit as well to finish off Houston’s offense. Gerrit Cole got his 2nd win of the postseason after allowing just one run on two hits while striking out ten over eight innings of work. Zack Greinke will start game one and is 0-1 with a 14.73 ERA and 5 strikeouts this postseason. In his career, Greinke is 4-4 with a 5.05 ERA and 55 strikeouts against the Yankees.

Part of me wants to take a flier on the Yankees with the big rest advantage, but Tanaka’s had issues in his career against the Astros and has allowed four or more runs in three of his last four starts on the road. On the other hand, Greinke’s been a mixed bag even though the wins have been there since coming over from Arizona as he’s allowed four or more runs in four of his last seven starts. Instead of trying to pick a side, I’m going to side with the over as this total feels low for a pair of teams with really solid offenses even with a good pitching matchup on tap. I think we see double-digit runs here in a 6-4 type of ball game, so I’ll side with the over in this spot.