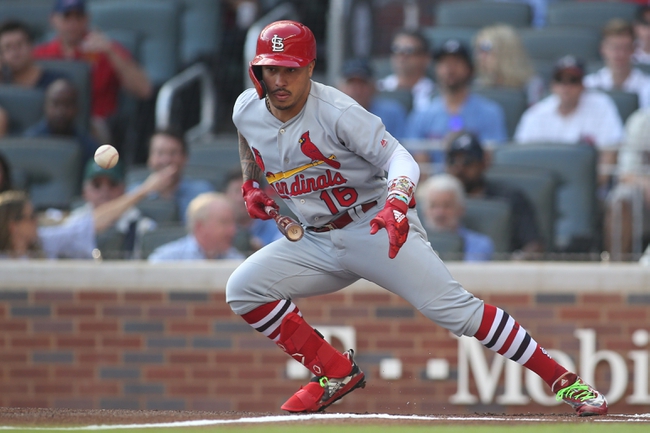 The Washington Nationals and the St. Louis Cardinals meet in game one of the NLCS in MLB action from Busch Stadium on Friday.

The Washington Nationals will look to make some noise in their first ALCS appearance in franchise history after upending the Dodgers in five games following a 7-3 win in Wednesday’s winner-take-all game five. Howie Kendrick had the game winning grand slam in the 10th inning while Juan Soto had a home run and two RBIs and Anthony Rendon went 3 for 5 with a solo home run and a pair of doubles. Ryan Zimmerman, Yan Gomes and Michael A. Taylor each had a base hit to finish off Washington’s offense as a team in the win. Stephen Strasburg allowed three runs on six hits while striking out seven over six innings of work, not factoring in the decision, while Daniel Hudson got the win in relief for his 1st victory of the postseason. Anibal Sanchez will start game one and is 0-0 with a 1.80 ERA and 9 strikeouts this postseason. In his career, Sanchez is 2-4 with a 3.44 ERA and 46 strikeouts against St. Louis

The St. Louis Cardinals come into the NLCS for the first time since 2014 after dismantling Atlanta in their own winner-take-all game five on Wednesday, posting a 13-1 win. Dexter Fowler, Kolten Wong, Tommy Edman and Paul DeJong each had two RBIs with a double with Edman going 2 for 5 with a triple as well. Marcell Ozuna, Matt Carpenter, Harrison Bader and Jack Flaherty each had an RBI while Paul Goldschmidt went 2 for 5 at the dish as well in the win. Flaherty got the win to improve to 1-1 in the postseason after giving up one run on four hits while striking out eight over six innings of work. Miles Mikolas will start game one and is 1-0 with a 1.50 ERA and 2 strikeouts this postseason. In his career, Mikolas is 2-2 with a 4.85 Era and 14 strikeouts against St. Louis.

You could make a case for Washington and the plus money as Sanchez was easier to trust in the regular season and the Nationals beat arguably the hardest team in the NL side of the playoffs this season in the Dodgers, a team a lot of people had representing the NL in the World Series. However, St. Louis was a really good team at home in the regular season and you have to think that some of that confidence from blowing out the Braves in what supposed to be a pressure cooker from start to finish. I think this series looks like the type to go the full seven games, but we have so start somewhere so I’ll side with the Cardinals in game one with the low line at home.