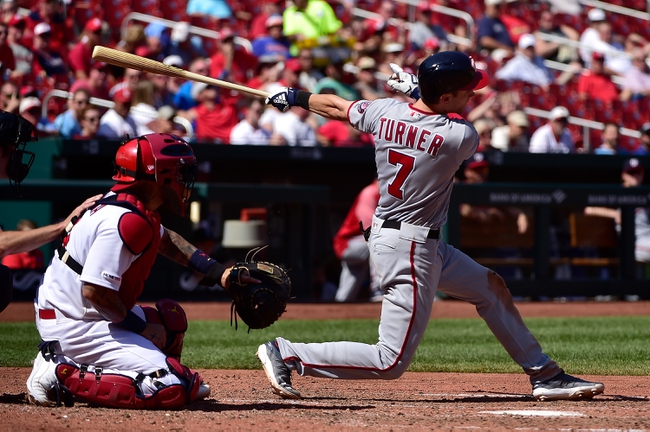 The Washington Nationals and St. Louis Cardinals meet Friday in game one of the NLCS at Busch Stadium.

The Washington Nationals are being thrown right back into a new series after a classic game five against the Los Angeles Dodgers. The Nationals have found their offense lately, scoring 17 runs in their last three games and four or more runs in five of their first six playoff games. The Washington Nationals have won 19 of their last 20 games when scoring four or more runs. The Nationals are in the Championship Series for the first time since 1981 when they were the Montreal Expos. Howie Kendrick leads the Nationals with five hits and five RBI while Trea Turner and Anthony Rendon have combined for 13 hits and five RBI. Anibal Sanchez gets the ball, and he was 11-8 with a 3.85 ERA and 134 strikeouts this season. Sanchez is 2-5 with a 2.98 ERA and 55 strikeouts in his postseason career.

The St. Louis Cardinals are coming off a five-game series against the Atlanta Braves, and they scored 13 runs in their comfortable victory Wednesday afternoon. The Cardinals have scored 19 runs in their last three games and have won 11 of their last 16 games when scoring more than one run. The 10 runs the Cardinals scored in the first inning of game five was the biggest opening inning in postseason history. The St. Louis Cardinals are in the NLCS for the first time since 2014. Paul Goldschmidt leads the Cardinals with nine hits and two RBI while Marcell Ozuna and Kolten Wong have combined for 14 hits and nine RBI. Miles Mikolas gets the ball, and he was 9-14 with a 4.16 ERA and 144 strikeouts this season. Mikolas is 1-0 with a 1.50 ERA and two strikeouts in his postseason career.