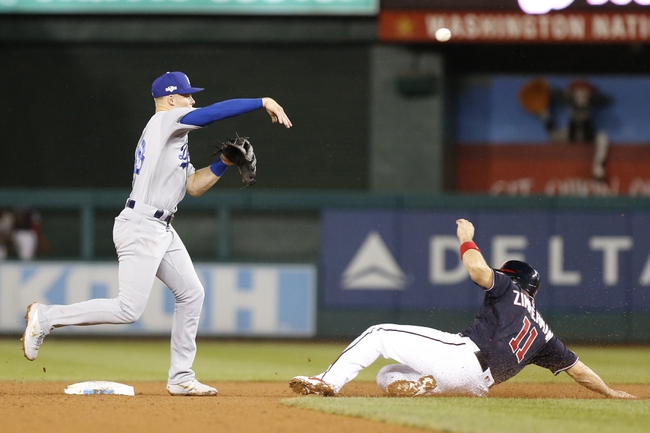 The Washington Nationals and the Los Angeles Dodgers meet in a winner take all game five in the NLDS from Dodger Stadium on Tuesday.

The Washington Nationals will look to steal the series on the road after posting a 6-1 win in game four on Monday. Anthony Rendon and Ryan Zimmerman each had three RBIs with Zimmerman going 2 for 4 with a home run to round out Washington’s scoring as a team in the win. Trea Turner went 3 for 5 with a double while Howie Kendrick and Michael A. Taylor each had two hits to make up Washington’s offense as a team in the victory. Max Scherzer got the win after giving up one run on four hits while striking out seven over seven innings of work. Stephen Strasburg will start game five and is 1-0 with a 1.50 ERA and 10 strikeouts this postseason. In his career, Strasburg is 3-5 with a 2.54 ERA and 84 strikeouts against the Dodgers.

The Los Angeles Dodgers will look to bounce back and win the series after a disappointing showing in game four on Monday. Justin Turner’s solo home run was the lone RBI that the Dodgers would plate in the losing effort while Corey Seager added a double and Cody Bellinger, Matt Beaty and David Freese each had a base hit as the Dodgers had just five hits as a team in the loss. Rich Hill game up one run on two hits while walking four over 2.2 innings in the start, not factoring in the decision, while Julio Urias ended up with the loss. Walker Buehler will start game five and is 1-0 with a 0.00 ERA and 8 strikeouts this postseason. In his career, Buehler is 0-1 with a 3.38 ERA and 15 strikeouts against Washington.

I’ve gone back and forth on this game as it could genuinely go either way, and you could make a case for either team and their respective starter. However, rather than try to pick a side, I feel that the safer play is to side with the under. It’s a fairly low number, but I think both teams will take a cautious approach and try to not be the first team that blinks and makes a mistake. I think we see some reserved baseball on both sides, so I’ll expect a pitchers’ duel and side with the under here.