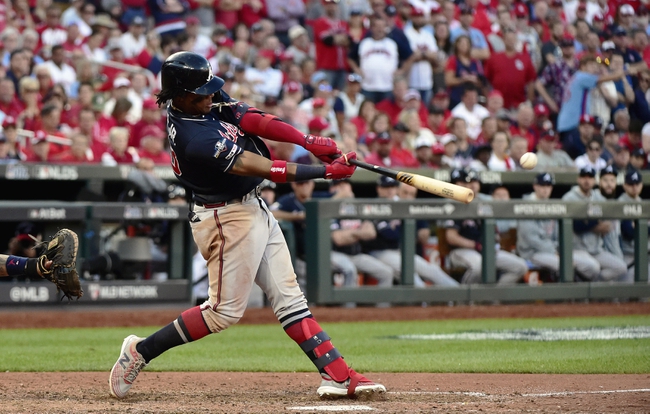 The St. Louis Cardinals and the Atlanta Braves meet in game five of the NLDS in MLB action from SunTrust Park on Tuesday.

The St. Louis Cardinals will look to win the series after forcing a game five by rallying for a 5-4 win on Monday. Marcell Ozuna went 2 for 5 with a pair of solo home runs while Yadier Molina had two RBIs. Paul Goldschmidt went 3 for 4 with a solo home run and two doubles to finish off St. Louis’ scoring as a team in the win. Tommy Edman went 2 for 3 with a double and Kolten Wong added a two-bagger of his own to finish off the Cardinals’ offense in the victory. Dakota Hudson gave up four runs, one earned, on five hits over 4.2 innings of work, not factoring in the decision. Miles Mikolas got the win in relief to improve to 1-0. Jack Flaherty will start game five and is 0-1 with a 3.86 ERA and 8 strikeouts this postseason. In his career, Flaherty is 1-1 with a 4.32 ERA and 19 strikeouts against Atlanta.

The Atlanta Braves will look to bounce back and win the set after dropping game two on Monday. Ozzie Albies had a home run and three RBIs while Adam Duvall added an RBI to round out Atlanta’s scoring as a team in the loss. Ronald Acuna Jr. went 4 for 5 with a triple and a double while Dansby Swanson went 2 for 3 with a double and Nick Markakis added a base hit of his own to round out the Braves’ offense as a team in the loss. Dallas Keuchel gave up three runs on four hits while striking out four over 3.1 innings of work, not factoring in the decision. Julio Teheran received the loss after giving up the game-deciding run in extra innings. Mike Foltynewicz will start game five and is 1-0 with a 0.00 ERA and 7 strikeouts this postseason. In his career, Foltynewicz is 3-4 with a 7.64 ERA and 31 strikeouts against St. Louis.

Foltynewicz’s struggles against the Cardinals in his career are well documented, but the fact is that Folty has stepped up his game lately, going 6-1 with a 2.65 ERA in 10 regular season starts since the all-star break and following that up with seven shutout innings earlier in the series. I just think getting the cheaper price with Atlanta at home is the better play as the Braves have been rock solid at home this season.