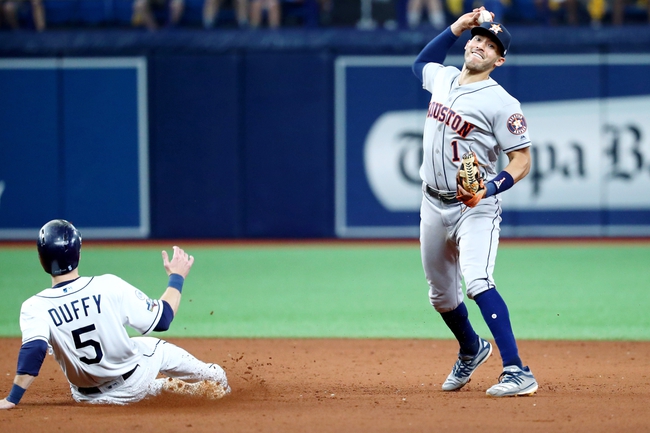 The Houston Astros and the Tampa Bay Rays will match up for Game 4 of their ALDS in MLB activity Tuesday.

Houston leads this set 2-1 right now. The Astros took a 6-2 victory on Friday, then followed that up with a 3-1 win in the Saturday game. The Rays were able to extend the series with a Game 3 victory 10-3 on Monday at Tropicana Field. Tampa banged out eight runs in the first four innings of that set, out-hitting the Astros by a margin of 12-7 as the Rays bats came alive.

For the Tuesday game, the Astros will bring out their big gun in Justin Verlander as the starter. Verlander went 21-6 this season with a 2.58 ERA and 300 strikeouts.

Countering on the other side, Tampa will start Diego Castillo on Tuesday in Game 4. Castillo posted a 5-8 record with a 3.41 ERA and 81 Ks this season.

Verlander is one of the sharpest pitchers in baseball right now when it comes to clinching series, as he’s 3-1 with a nice 1.05 ERA in four of those starts during his career. He tossed seven scoreless innings in Game 1, striking out eight Tampa batters.

The Rays are going to throw the kitchen sink at Houston here in an effort to stay alive, and that starts with Castillo, who put up 1.2 scoreless frames in Game 2 and will serve as the opener in a bullpen game.

Castillo should be able to stifle the Astros batters here, but everyone behind him has to follow suit. And with Verlander on the other side that’s a difficult proposition. I’m leaning Astros to close it out here.