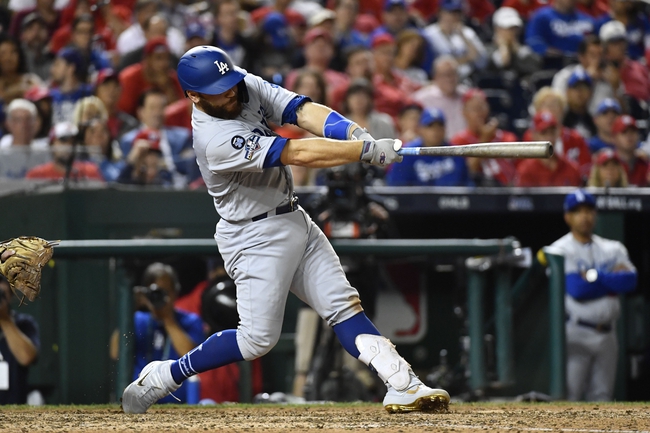 The Los Angeles Dodgers and the Washington Nationals meet in game four of the NLDS from Nationals Park on Monday.

The Los Angeles Dodgers will look to win the series after pulling ahead 2-1 with a 10-4 win over the Nats in game three on Sunday. Russell Martin went 2 for 4 with a home run and four RBIs while Justin Turner went 3 for 6 with a home run, a double and three RBIs. Kike Hernandez had a double and two RBIs while Max Muncy added a solo shot to finish off the Dodgers’ scoring as a team in the win. David Freese went 3 for 3 with a double and Cody Bellinger added a two-bagger of his own while Gavin Lux and Corey Seager each had a base hit. Hyun-Jin Ryu got the win after allowing two runs on four hits while striking out three over five innings of work. Rich Hill will start game four and was 4-1 with a 2.45 ERA and 72 strikeouts this season. In his career, Hill is 2-2 with a 4.08 ERA and 29 strikeouts against Washington.

The Washington Nationals will look to bounce back and fight for one more day after dropping game three on Sunday. Juan Soto went 2 for 3 with a home run and two RBIs while Asdrubal Cabrera had an RBI as well in the losing effort. Adam Eaton, Howie Kendrick, Michael A. Taylor and Anthony Rendon each had a base hit to finish off the Nationals’ offense as Washington had just six hits as a team in the loss. Anibal Sanchez allowed one run on four hits while striking out nine over five innings of work, not factoring in the decision. Patrick Corbin ended up with the loss in relief after giving up six runs on four hits in less than an inning. Max Scherzer will start game four and was 11-7 with a 2.92 ERA and 243 strikeouts this season. In his career, Scherzer is 5-4 with a 2.76 ERA and 92 strikeouts against the Dodgers.

This series has been hard for me to get a grip on, but with that said, I’m going to side with Washington here. I had this series going five before it even started, and I trust Scherzer a whole heck of a lot more than I do Rich Hill. The Nationals will need a strong outing from Mad Max as their bullpen woes have continued into the postseason, but I think Scherzer is capable so I’ll side with the Nats at home to force a game five with a win here.