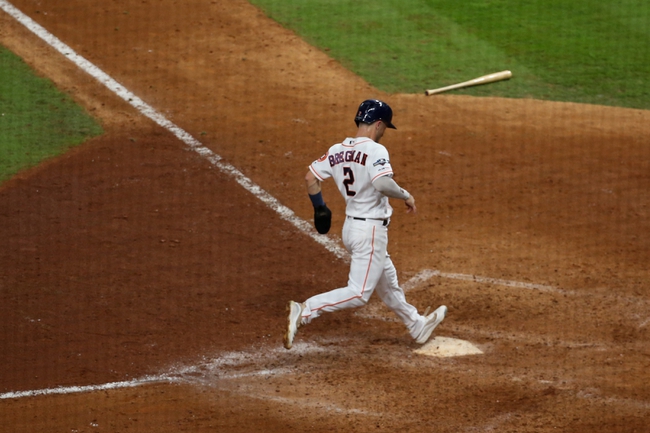 TV: MLB Network Stream the MLB Game of the Day all season on ESPN+. Sign up now!

The Houston Astros and the Tampa Bay Rays meet in game three of the ALDS from Tropicana Field on Monday.

The Houston Astros will look to sweep the series and advance to their third straight ALCS after winning the first two games of the series with a 3-1 win in game two on Saturday. Alex Bregman went 2 for 4 with a solo home run while Carlos Correa also went 2 for 4 with a double and an RBI. Martin Maldonado added a base hit to finish off Houston’s scoring in the win while Jose Altuve added a double. Yordan Alvarez went 2 for 4 while Yuli Gurriel added a base knock of his own to finish off Houston’s offense in the victory. Gerrit Cole got the win after 7.2 innings of four hit shutout baseball, striking out 15 on the way to the win. Will Harris closed things out for his 1st save of the postseason. Zack Greinke will start game three and was 18-5 with a 3.06 ERA and 187 strikeouts this season. In his career, Greinke is 4-6 with a 3.36 ERA and 105 strikeouts against Tampa Bay.

The Tampa Bay Rays will try to fight for one more day after coming home down 0-2 following their loss on Saturday. Avisail Garcia was responsible for the lone Tampa RBI while Tommy Pham went 2 for 4 and Kevin Kiermaier had a double. Willy Adames and Austin Meadows each had a base hit to finish off Tampa Bay’s offense as a team in the losing effort. Blake Snell took the loss after allowing one run on four hits while striking out five over 3.1 innings of work. Charlie Morton will start game three and is 16-6 with a 3.05 ERA and 240 strikeouts this season. In his career, Morton is 4-6 with a 6.28 ERA and 44 strikeouts against Houston.

You could make a case for Tampa Bay and the plus money as Morton’s been the Rays’ workhorse this year and he looked good in the wild card game. However, Morton’s given up eight runs in nine innings against the Astros in two starts this season. Greinke’s been a mixed bag since coming over from Arizona, but the fact is that he’s still gone 8-1 as an Astro and this is the kind of situation that he was brought in for. I’ll lay the juice with Houston on the road for the sweep here.