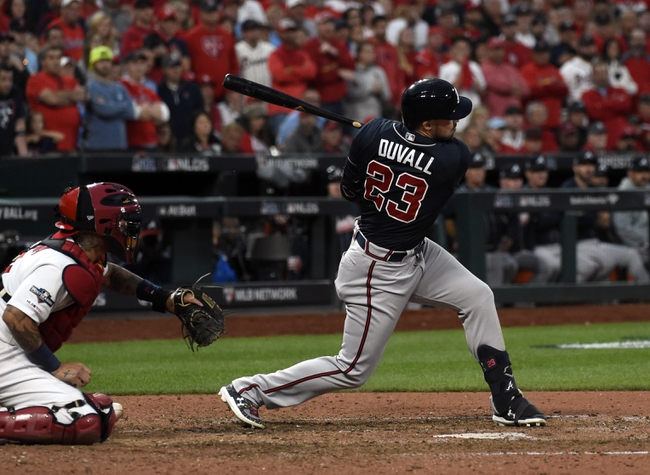 The Atlanta Braves and the St. Louis Cardinals meet in game four of the NLDS in MLB action from Busch Stadium on Monday.

The Atlanta Braves will look to win the series and advance to the NLCS for the first time since 2001 after winning game three by a final score of 3-1 on Sunday. Adam Duvall had two RBIs while Dansby Swanson went 3 for 4 with two doubles and an RBI to finish off Atlanta’s scoring as a team in the win. Ozzie Albies went 2 for 4 at the dish while Josh Donaldson added a base hit of his own to cap off Atlanta’s offense in the victory. Mike Soroka gave up one run on two hits while striking out seven over seven innings of work, not factoring in the decision. Sean Newcomb got the win in relief while Mark Melancon picked up his 2nd save of the postseason. Max Fried is slated to start game four and was 17-6 with a 4.02 ERA and 173 strikeouts this season. This will be Fried’s second career start against St. Louis.

The St. Louis Cardinals will look to fight another day and even the series at 2-2 after dropping game three on Sunday. Matt Carpenter had the lone RBI for the Cardinals while Marcell Ozuna went 2 for 4 with a double. Paul Goldschmidt added a double of his own while Jose Martinez had a base knock to round out St. Louis’ offense as the Cardinals had just four hits as a team in the losing effort. Adam Wainwright threw 7.2 shutout innings giving up just four hits while striking out eight, not factoring in the decision. Carlos Martinez took the loss in relief after allowing three runs in the 9th inning. Dakota Hudson will start game four and was 16-7 with a 3.35 ERA and 136 strikeouts this season. This will be Hudson’s second career start against Atlanta.

Fried is slated to make this start for the Braves but he threw 13 pitches on Sunday so his status could be changed shortly before first pitch. Either way, I’m rolling with the Cardinals here. Hudson has been solid, as the Cardinals has gone 19-5 in his last 24 starts since Mid-May and the Cardinals are simply in must-win mode here. St. Louis has their backs up against the wall here, but behind Hudson, they should be able to find enough to get the job done at home, forcing a deciding game five.