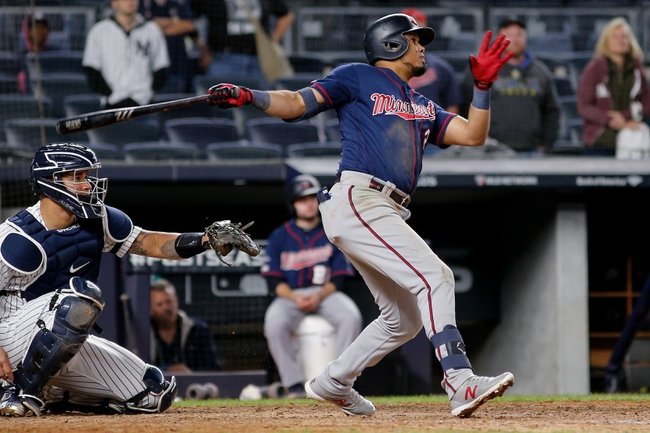 The New York Yankees and the Minnesota Twins meet in game three of the NLDS from Target Field on Monday.

The New York Yankees will look to complete the sweep and advance to their 2nd ALCS in the last 3 seasons after picking up an 8-2 win in game two on Saturday. Didi Gregorius had a home run and four RBIs while Brett Gardner, Edwin Encarnacion, Giancarlo Stanton and Gleyber Torres each had an RBI to finish off New York’s scoring as a team in the win. Aaron Judge and Gio Urshela each had two hits while DJ LeMahieu had a base hit as well to cap off New York’s offense as a team in victory. Masahiro Tanaka got the win after allowing one run on three hits while striking out seven over five innings of work. Luis Severino will start game three and was 1-1 with a 1.50 ERA and 17 strikeouts this season. In his career, Severino is 0-1 with a 4.15 ERA and 8 strikeouts against Minnesota.

The Minnesota Twins will look to get back into the series after dropping the first two games of the series on the road. In Saturday’s loss, Mitch Garver and Luis Arraez each went 2 for 4 with an RBI with Arraez adding a pair of doubles. Nelson Cruz and Eddie Rosario each had a base hit to finish off Minnesota’s offense as a team in the losing effort as the Twins had just six hits as a team. Randy Dobnak took the loss after being on the hook for four runs on six hits over two innings of work. Jake Odorizzi will start game three and was 15-7 with a 3.51 ERA and 178 strikeouts this season. In his career, Odorizzi is 7-9 with a 4.71 ERA and 93 strikeouts against the Yankees.

Odorizzi has been solid at Target Field this season, so getting him with plus money is tempting, but that’s about it for the Twins. Severino hasn’t seen much action since coming back from injury, but it’s hard for me to make a case for a Twins team that hasn’t won a playoff game since 2004. It’s kind of eerie that the last time the Twins won a playoff game was 15 years ago to the day of Minny’s loss in game two on Saturday. New York’s simply been the better team and getting the Yankees at a reasonable price seems like a solid play for me given how the first two games of the series has gone so I’ll side with New York for the sweep here.