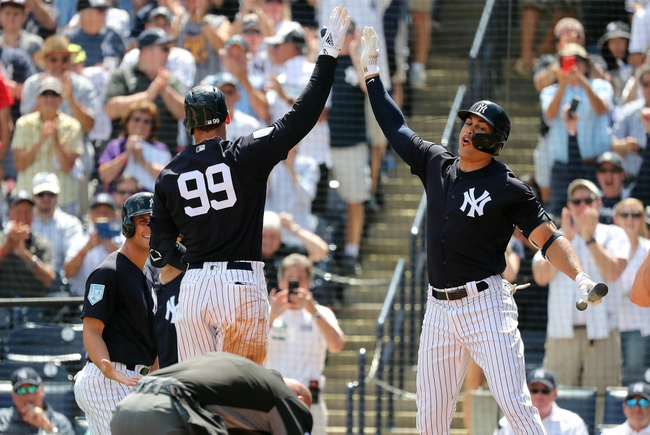 The New York Yankees and Minnesota Twins meet Monday in game three of the ALDS at Target Field.

The New York Yankees can advance to their second ALCS in the last three years with a victory here. The Yankees have scored 18 runs in the first two games this series and have now won 23 of their last 28 games when scoring four or more runs. The New York Yankees have the best lineup in baseball and if this offense continues to produce like this, they’re going to be crowned World Series champs at the end of the month. DJ LeMahieu leads the Yankees with four hits and four RBI while Edwin Encarnacion and Gleyber Torres have combined for six hits and five RBI. Luis Severino gets the ball, and he was 1-1 with a 1.50 ERA and 17 strikeouts this season. Severino is 1-2 with a 6.26 ERA and 21 strikeouts in his postseason career.

The Minnesota Twins need a victory to save their season and force a gam four on Tuesday. The Twins haven’t been able to figure anything out through the first two games, but it’s the pitching staff that’s been downright awful. The Minnesota Twins have allowed 23 runs in their last three games, and while the offense has the ability to put up crooked numbers in their own right, it’s impossible to stay confident when the pitching gets rocked every other inning. Mitch Garver leads the Twins with two hits and one RBI while Eddie Rosario and Miguel Sano have combined for two hits and one RBI. Jake Odorizzi gets the ball, and he was 15-7 with a 3.51 ERA and 178 strikeouts this season. This will be Odorizzi’s first career postseason appearance.

Severino has allowed six hits and two runs in 12 innings this season, as he missed majority of the year due to injury. Odorizzi has allowed 18 hits and eight runs in his last 22 innings, and he has a 3.42 ERA and .244 allowed batting average at home. The Minnesota Twins should hit better at home and put up more of a fight with their season on the line, but Odorizzi is simply not the pitcher who is going to put fear in the heart of this stacked Yankees lineup that is finally healthy and firing on all cylinders. Didi Gregorius was probably the only weak link in the Yankees batting order, and he just got out of his funk Saturday night with a grand slam. That's without mentioning that Severino has looked sharp in his few reps and is probably the best NYY pitcher when he's healthy. The New York Yankees complete the sweep and move on to the ALCS for the second time in three years.