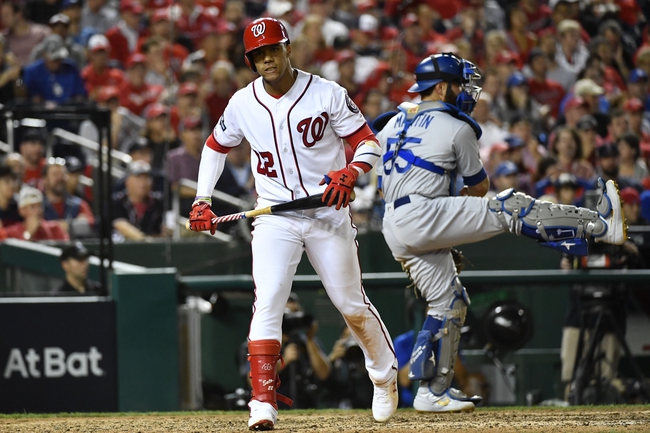 The Los Angeles Dodgers and the Washington Nationals will match up for Game 4 of their NLDS in MLB activity on Monday.

In Game 1 of this series on Thursday, the Dodgers banged out a big 6-0 shutout victory. Washington’s bats woke up in Game 2 on Friday, and they were able to power out a 4-2 win to even up the set at 1-1. In the Sunday Game 3 at Nationals Park, Washington jumped out to a 2-0 lead after one inning but LA slammed in seven runs in the sixth inning on the way to a big 10-4 victory to take control of the series back.

Over on the Nationals’ side, they’re going to be rolling with Max Scherzer. In the regular season Scherzer went 11-7 with a 2.92 ERA and 243 Ks. He last appeared in Game 2, striking out the side in relief.

Hill missed quite a bit of time this season with an MCL tear in his left knee, but was able to return on September 12 and he made three (very short) starts to end the regular season. In those games, Hill posted 5.2 innings with one hit, six walks and one earned run. As for Scherzer, he’s on short rest here after appearing in Game 2 and is Washington’s best hope to stay alive.

I’m not super confident about Hill right now even though it’s a small sample size—the BBs are a concern, as well as a fairly high pitch count—so I’m leaning Nationals.