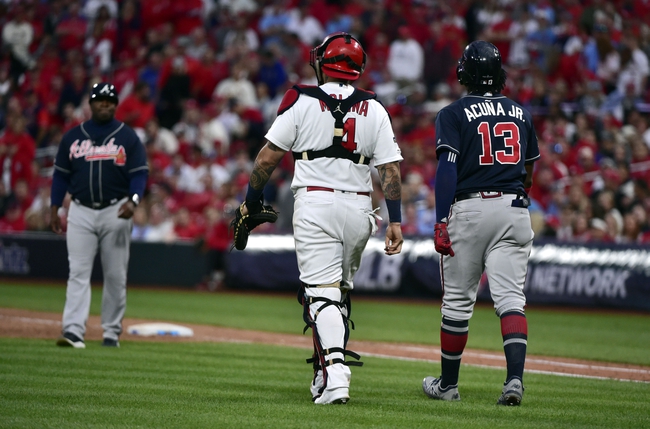 The Atlanta Braves and St. Louis Cardinals meet Monday in game four of the NLDA at Busch Stadium.

The Atlanta Braves will advance to their first NLCS since 2001 with a victory here. The Braves dug deep and found a way to win game three in the ninth inning after struggling offensively the entire game. The Atlanta Braves have still lost seven of their last 10 games when scoring three or less runs, so wheel they’ve won the last two meetings, it would be nice if they found a spark offensively. Nick Markakis leads the Braves with two hits while Ozzie Albies and Ronald Acuna Jr. have combined for five hits and two RBI. Dallas Keuchel gets the ball, and he was 8-8 with a 3.75 ERA and 91 strikeouts this season. Keuchel is 4-2 with a 3.20 ERA and 48 strikeouts in his postseason career.

The St. Louis Cardinals need a win here to save their season and force a game five on Wednesday. The Cardinals have been held to one run in their last 18 innings and have been held to two or less runs in four of their last eight games. As tough a the St. Louis Cardinals are and the ability to find ways to win, the Cards have to be damn near perfect to win games in the postseason due to the lack of consistent offense. Tommy Edman leads the Cardinals with two hits while Yadier Molina and Dexter Fowler have combined for thee hits and one RBI. Dakota Hudson gets the ball, and he was 16-7 with a 3.35 ERA and 136 strikeouts this season. This will be Hudson's first career postseason appearance.

I'm leaning toward the Braves in this game simply due to the fact the Cardinals are coming off a rough, rough loss. The Atlanta Braves have also won twice without the offense doing much, and you know it's only a matter of time before things pick up. Still, I'll update with an official pick once the starting pitchers are announced.

Update: Keuchel is often hit or miss, so I'm not sure I trust him on the mound in this spot on the road. While Hudson hasn't pitched in the postseason before, he does have a 2.75 ERA and .224 allowed batting average at home. I was leaning Braves in this game, but I kind of give the Cardinals the edge with the pitching matchup. This has been a weird series for me to figure out. So, let's see a game five.