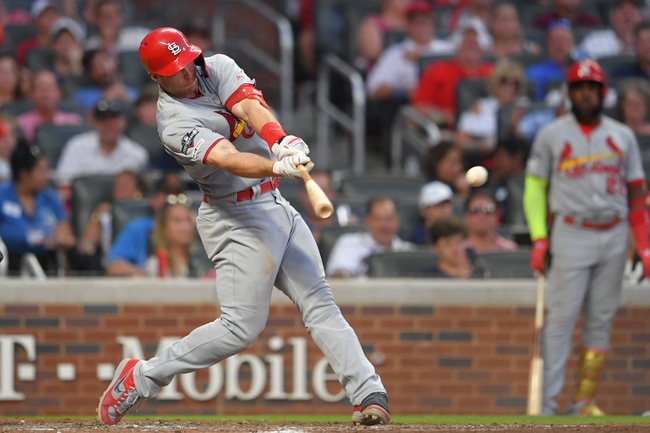 The Atlanta Braves and the St. Louis Cardinals meet in game three of the NLDS in MLB acton from Busch Stadium on Sunday.

The Atlanta Braves will look to steal home field back after evening the set up at one win apiece following a 3-0 win in game two on Friday. Adam Duvall had a home run and two RBIs while Josh Donaldson added an RBI to cap off Atlanta’s scoring as a team in the win. Ronald Acuna Jr. had a double while Ozzie Albies, Dansby Swanson, Brian McCann, Matt Joyce and Nick Markakis each had a base hit as well to cap off Atlanta’s offense in the victory. Mike Foltynewicz got the win after tossing seven innings of three hit ball with seven strikeouts. Mark Melancon closed out the 9th for his 1st save of the postseason. Mike Soroka will start game three and was 13-4 with a 2.68 ERA and 142 strikeouts in the regular season. In his career, Soroka is 1-0 with a 0.69 ERA and 8 strikeouts against St. Louis.

The St. Louis Cardinals will look to bounce back at home after being shut out in game two on Friday. Marcell Ozuna and Yadier Molina each went 2 for 4 at the dish while Paul Goldschmidt and Jose Martinez each had a base hit as none of St. Louis’ six hits went for extra bases in the losing effort. Jack Flaherty took the loss, falling to 0-1 after allowing three runs on eight hits while striking out eight over seven innings of work. Adam Wainwright will start game three and was 14-10 with a 4.19 ERA and 153 strikeouts this season. In his career, Wainwright is 9-4 with a 3.63 ERA and 70 strikeouts against Atlanta.

I’ve had a hard time gauging this series, but I think I can figure it out here. Atlanta got the momentum back after a solid defensive outing and have a prime opportunity to get home field back here. Wainwright has pitched well over the course of the season, but he’s still showing occasional signs of wearing down here and there. Soroka is actually a much better pitcher on the road than at home, going 8-1 in 19 career road starts with a 1.82 ERA away from SunTrust Park. I just think if Atlanta’s going to get a game back it’s here and I’ll lay the juice with the Braves as such.