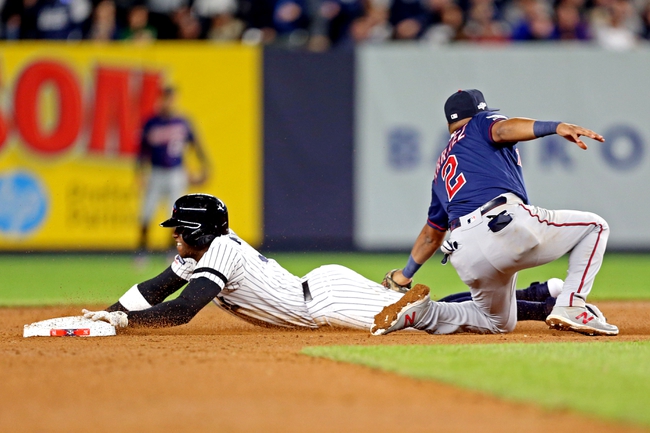 The Minnesota Twins and New York Yankees meet Sunday in game two of the ALDS at Yankee Stadium.

The Minnesota Twins need a win here to tie up the series before going home for game three on Monday. The Minnesota Twins need to find their pitching staff if they’re going to make this series interesting, as the starting pitching leaves a lot to be desired and the bullpen doesn’t scare anybody. The Twins allowed two or more runs in four of the eight innings. Jorge Polanco leads the Twins with two hits and two RBI while Marwin Gonzalez and Nelson Cruz have combined for three hits and one RBI. Randy Dobnak gets the ball, and he was 2-1 with a 1.59 ERA and 23 strikeouts this season. This will be Dobnak’s first career postseason appearance.

The New York Yankees have a chance to all but put this series to bed with a win here and a 2-0 lead. The New York Yankees showed just how deadly their lineup is when everybody is swinging the bats well, and it’s the main reason why they can make a run to the World Series. The Yanks bullpen also did its thing in the series opener, which has to be encouraging if you’re holding a NYY ticket. DJ LeMahieu leads the Yankees with three hits and four RBI while Edwin Encarnacion and Brett Gardner have combined for three hits and two RBI. Masahiro Tanaka gets the ball, and he was 11-9 with a 4.45 ERA and 149 strikeouts this season. Tanaka is 3-2 with a 1.50 ERA and 25 strikeouts in his career against the Braves.