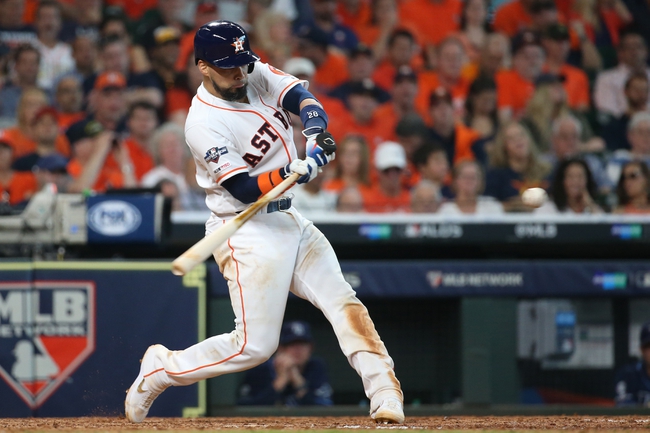 The Tampa Bay Rays and the Houston Astros meet in game two of the ALDS in MLB action from Minute Maid Park on Saturday.

The Tampa Bay Rays will look to bounce back after dropping the series opener on Friday by a final score of 6-2. Austin Meadows had a double and an RBI while Eric Sogard added an RBI of his own to cap off Tampa Bay’s scoring as a team in the loss. Tommy Pham, Brandon Lowe and Joey Wendle each had a base hit to finish off Tampa Bay’s offense as the Rays cranked out just five hits as a team in the losing effort. Tyler Glasnow took the loss after allowing two runs on four hits while striking out five over 4.1 innings of work. Blake Snell will start game two and was 6-8 with a 4.29 ERA and 147 strikeouts this season. In his career, Snell is 2-2 with a 4.73 ERA and 31 strikeouts against Houston.

The Houston Astros will look to take a 2-0 lead in the series after opening things with their win on Friday. Jose Altuve had a home run and two RBIs while Yuli Gurriel and Yordan Alvarez each had a double and an RBI with Gurriel going 2 for 4 at the dish. Michael Brantley also went 2 for 4 while Alex Bregman added a double of his own and Carlos Correa and Robinson Chirinos each had a base hit to finish off Houston’s offense as a team in the win. Justin Verlander got the win after tossing seven shutout innings, giving up just one hit while striking out eight on the way to the win. Gerrit Cole will start game two and is 20-5 with a 2.50 ERA and 326 strikeouts this season. In his career, Cole is 0-2 with a 3.51 ERA and 37 strikeouts against Tampa Bay.

The Rays and heavy plus money is tempting, especially with a former Cy Young winner in Snell on the mound. However, Snell hasn’t gone deep in a game since late-July, and I have this thing about not backing pitchers making their postseason debut usually as there has to be some sort of nerves in play. I also think that all of the air is out of Tampa Bay’s proverbial sails here, and going up against the front runner for this year’s Cy Young won’t help as Cole has been lights out for most of the season, including going 16-0 in his last 22 starts and not taking a loss since late May. To put that into perspective, since the all-star break, Cole has gone 11-0 with a 1.79 ERA including a 1.07 ERA and 5-0 record in September and October. I just think the Rays are really overmatched here, so I’ll side with Houston on the RL.