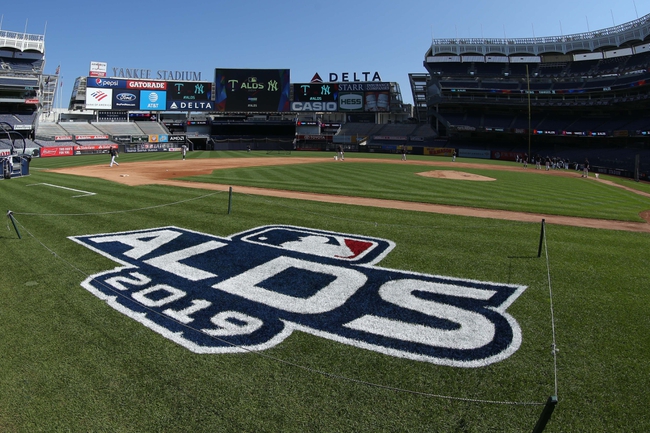 The Minnesota Twins and the New York Yankees meet in game one of the ALDS in MLB action from Yankee Stadium on Friday night.

The Minnesota Twins will look to make some noise and advance to the ALCS for the first time since 2002 after winning this year’s AL Central title, finishing with a record of 101-61. Nelson Cruz led the Twins with 41 home runs and a .311 batting average while finishing 2nd with 108 RBIs. Jorge Polanco led Minny with 186 total hits including 40 doubles while Eddie Rosario had 32 home runs and a Twins-leading 109 RBIs this season. Jake Odorizzi ended up leading the Twins’ pitching staff with 15 wins, posting a 3.51 ERA and 178 strikeouts across 159 innings. Jose Berrios was 2nd with 14 wins as part of a 14-8 record with a 3.68 ERA and a team-high 195 strikeouts this season. Berrios will get the start in game one and in his career, Berrios is 1-2 with a 5.79 ERA and 16 strikeouts against the Yankees.

The New York Yankees enter the postseason representing the AL East after finishing with a 103-59 overall record this season. Gleyber Torres led an injury-plagued Yankee team with 38 home runs while DJ LeMahieu led the Yankees with 197 hits, 102 RBIs and a .327 batting average while finishing 2nd with 33 doubles this season. Brett Gardner had a team-high 7 triples while Gio Urshela has a team-high 34 doubles this year. Domingo German led the Yankees with 18 wins but will miss the postseason due to a domestic abuse allegation, placing him on the exemption list for the remainder of the season. Masahiro Tanaka was the lone starter to pitch at least 162 innings this year while James Paxton came 2nd with 15 wins as part of his 15-6 record with a 3.82 ERA and 186 strikeouts this season. Paxton will start game one here and in his career, Paxton is 3-1 with a 2.27 ERA and 39 strikeouts against Minnesota.

I’m genuinely on the fence here as the Twins have the offensive capability to hang with the Yankees but Berrios has had issues against New York in his career, including allowing three runs in three innings against New York in his lone career playoff start. I’m a big believer in playoff nerves for guys who are making their postseason debut or have very little experience playing in big games like these. Berrios struggled against New York and Paxton is making his postseason debut here, so I’m expecting some slip-ups and with that said, I’m going to side with the over. I think this is a low total even with a pair of solid pitchers on the mound as both teams have shown that they’re able to put runs on the board all season long, despite who is hurling pitches on the other side. I think this total hits double digits, so give me the over in this spot.