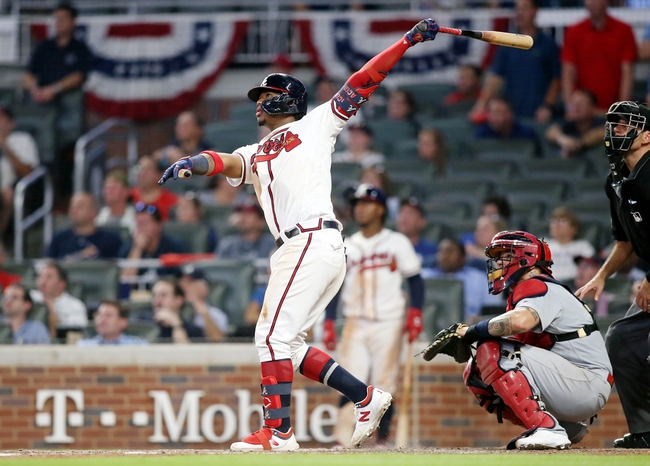 The St. Louis Cardinals and the Atlanta Braves meet in game two of the NLDS in MLB action from SunTrust Park on Friday.

The St. Louis Cardinals will look to take a commanding lead in the series after stealing game one on Thursday by a final score of 7-6. Marcell Ozuna and Kolten Wong each went 2 for 4 with a double and two RBIs with Ozuna adding a second double. Dexter Fowler, Paul Goldschmidy and Matt Carpenter each had an RBI to finish off the Cardinals’ scoring as a team in the win with Goldschmidt posting a solo home run and a double. Tommy Edman and Paul DeJong each had two hits with Edman adding a double while Miles Mikolas added a double and Harrison Bader added a base hit of his own to finish off St. Louis’ offense as a team in the victory. Mikolas allowed one run on three hits over five innings of work, not factoring in the decision while Carlos Martinez had a shaky 9th inning but got the win to improve to 1-0 this postseason. Jack Flaherty will start game two and is 11-8 with a 2.75 ERA and 231 strikeouts this season. In his career, Flaherty is 1-1 with a 4.32 ERA and 19 strikeouts against Atlanta.

The Atlanta Braves will look to bounce back and even the series up at one win apiece following their loss in game one on Thursday. Ronald Acuna Jr. went 3 for 4 with a home run, a double and two RBIs while Freddie Freeman, Josh Donaldson and Dansby Swanson each had an RBI with Freeman belting a solo home run. Nick Markakis and Brian McCann each had a double while Adam Duvall added a base hit to finish off Atlanta’s offense as a team in defeat. Dallas Keuchel gave up one run on five hits over 4.2 innings of work, not factoring in the decision. Mark Melancon took the loss in relief to fall to 0-1 this postseason. Mike Foltynewicz will start game two and is 8-6 with a 4.54 ERA and 105 strikeouts this season. In his career, Foltynewicz is 3-4 with a 7.64 ERA and 31 strikeouts against St. Louis.

It’s extremely tempting to take plus money with Atlanta at home in what’s essentially a must win for the Braves after dropping game one. The Braves also had a lot of momentum after nearly completing the comeback. However, I think that scare woke the Cardinals up and made St. Louis realize the task at hand. Both starters have been solid down the stretch, but the difference for me is that Flaherty has a 0.91 ERA in the second half of the season. Foltynewicz has been solid and the Braves have been near money with him on the mound for quite some time, but Folty’s struggles against the Cardinals in his career are well documented and I think that St. Louis’ advantage there is enough to push the lean in their direction to take a 2-0 series lead back home.