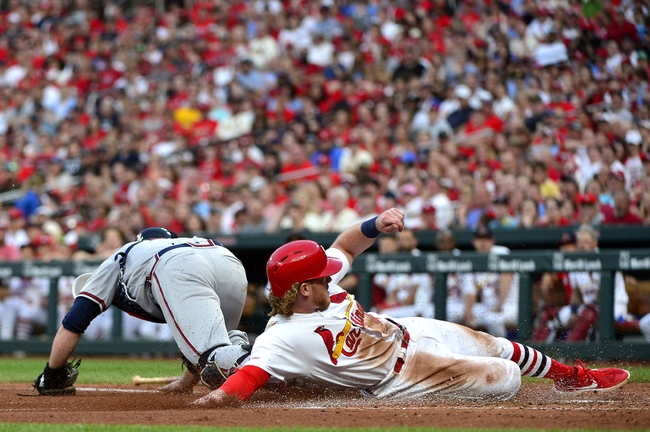 The St. Louis Cardinals and Atlanta Braves meet Thursday in game one of the MLB NLDS at SunTrust Park.

The St. Louis Cardinals are in the postseason for the first time since 2015 and have won eight of their last 15 games. The St. Louis Cardinals can be a little short on offense at times, but they have a top-five ERA in baseball, the seventh best WHIP and one of the better defenses which has committed just 66 errors. The Cardinals may not be pretty all the time, but they’re fundamentally sound and usually don’t beat themselves. Paul Goldschmidt leads the Cardinals with 155 hits and 97 RBI while Paul DeJong and Kolten Wong have combined for 272 hits and 137 RBI. Miles Mikolas gets the ball, and he was 9-14 with a 4.16 ERA and 144 strikeouts this season. This will be Mikolas’ first career postseason appearance.

The Atlanta Braves are in the postseason for the fifth time since 2006 and enter this series losing five of their last six games. The Atlanta Braves do have a top-10 ERA in baseball and are solid defensively, but it’s their offense that has led the way to an NL East crown. The Braves are seventh in runs per game, ninth in team batting average, eighth in homers and ninth in stolen bases. With six different batters with 62 or more RBI, the Braves are capable of going toe-to-toe with just about any offense in baseball. Ozzie Albies leads the Braves with 189 hits and 86 RBI while Freddie Freeman and Ronald Acuna Jr. have combined for 351 hits and 222 RBI. Dallas Keuchel gets the ball, and he was 8-8 with a 3.75 ERA and 91 strikeouts this season. Keuchel is 4-2 with a 3.31 ERA and 48 strikeouts in his postseason career.