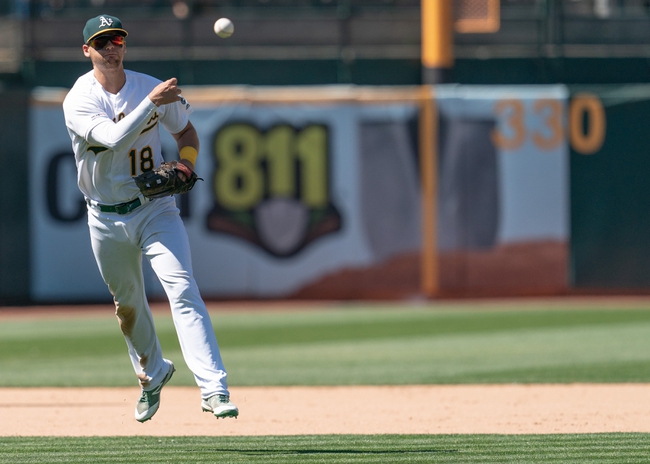 TV: ESPN, SN One Stream the MLB Game of the Day all season on ESPN+. Sign up now!

The Tampa Bay Rays and the Oakland A’s meet in the AL Wild Card game in MLB action from Oakland-Alameda County Coliseum on Wednesday night.

The Tampa Bay Rays enter the Wild Card game after finishing the regular season with a record of 96-66, finishing 2nd in the AL East division. Austin Meadows is arguably Tampa Bay’s best hitter, batting .291 with a team-high 33 home runs and 89 RBIs as well as logging 29 doubles and a team-high 7 triples. Tommy Pham just edged out Meadows for the team lead in hits with 155 hits to Meadows’ 154, while Pham also leads the Rays with 33 doubles this season. The Rays are known for being the originator of the opener pitching strategy and the Rays used a plethora of pitchers this season. Charlie Morton was the lone pitcher to throw more than 162 innings this season, going 16-6 with a 3.05 ERA and 240 strikeouts and Morton will be making the start for the Rays in this game. In his career, Morton is 2-1 with a 2.97 ERA and 45 strikeouts against Oakland.

The Oakland A’s enter the Wild Card game with home field advantage after finishing the regular season with a record of 97-65, finishing 2nd in the AL West division. Marcus Semien leads the A’s with a .285 batting average as well as a team-high 185 hits with 43 doubles, 7 triples, 33 home runs and 92 RBIs while Oakland’s pair of Matts, Matt Chapman and Matt Olson each have 26 home runs and 91 RBIS this season. Mike Fiers led Oakland’s staff with 184.2 innings as part of a 15-4 record on the year, but for this one the A’s have decided the hand the ball to Sean Manaea who rejoined the team in September after shoulder surgery near the end of last season. Manaea allowed two runs or less in all five starts, winning his last four decisions and going 4-0 with a 1.21 ERA heading into the postseason. In his career, Manaea is 1-1 with a 2.70 ERA and 15 strikeouts against Tampa Bay.

I’ve gone back and forth on this game as Oakland is a tough out at home and the Rays are more likely of the two to have a hiccup offensively in a must-win game. However, this will be Manaea’s first career postseason start, and even though he’s been mowing guys down left and right over the last month, you have to imagine there will be a lot of nerves and jitters in a must-win, winner take all game for the A’s. Morton is a proven starter in the postseason and he’s posted a 0.68 ERA in two starts against the A’s this season. I just feel more comfortable taking plus money with the pitcher with a proven postseason track record, so I’ll take Tampa Bay here.

Get Premium Picks Start Winning Now »
The pick in this article is the opinion of the writer, not a Pick Dawgz site consensus.
Previous Pick
MLB Free Agency: Who's Left?
Next Pick
Atlanta Braves vs. St. Louis Cardinals - 10/3/19 MLB Pick, Odds, and Prediction