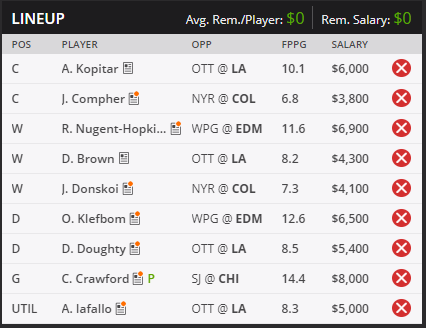 Kicking off our lineup tonight, we’re going to be looking at the Los Angeles Kings in their home match-up against the Ottawa Senators.

Los Angeles has had a tough season, however, the Kings have been playing well as of late, wining their last 6 games which includes putting up 10 combined goals in their last two home games agianst Colorado & Minnesota.

The match-up couldn’t get much better for the Kings to keep up their strong scoring output as they face an Ottawa Senators team who is on the 2nd half of a back-to-back after losing to the Anaheim Ducks, 5-2 last night. Ottawa has struggled defensively this season and those struggles have been highlighted on the road where the Senators rank 30th in goals allowed/game (3.73).

For the Kings, we’re going to go with a 4-man stack of Anze Kopitar, Dustin Brown, Alex Iafallo & Doug Doughty.

We’re going to take a look at the Edmonton Oilers in their home match-up against the Winnipeg Jets. Edmonton has been solid at home this season, posting a 17-10-6 record while averaging 3.30 goals/game.

For the Oilers, I’m going to go with both Ryan Nugent-Hopkins & Oscar Klefbom.

I’m going with some value with the Colorado Avalanche tonight in their home match-up against the New York Rangers. For the Avalanche, we’re going to go with both J.T. Compher & Joonas Donskoi.

Rounding out our team, we’re going to go with Corey Crawford as I like the Blackhawks to pick up a win at home agianst a San Jose Sharks team that is averaging just 2.30 goals/game on the road this season.

The pick in this article is the opinion of the writer, not a PickDawgz site consensus.
Previous Pick
DFS - NBA - FanDuel - Main Slate Lineup - 3/11/20
Next Pick
DFS - PGA - DraftKings - The Players Championship - 3/11/20