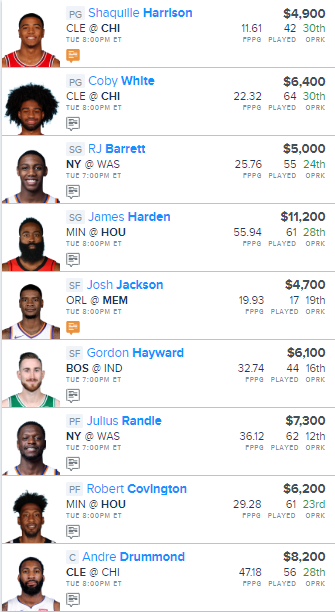 For our lineup tonight, we’re going to start off looking at the Cleveland Cavaliers vs. the Chicago Bulls.

Cleveland will be without Tristan Thompson tonight  due to an eye injury which opens that door for Andre Drummond to feast on the weak interior defense of the Chicago Bulls. Drummond came back from a 3-game absence this past Sunday agianst the Spurs and put up a monster double-double with 28 points, 17 rebounds, 1 assist, & 3 blocks.

For the Bulls, there is a ton of usage available with Zach LaVine currently out and we’re going to roll with a backcourt duo of Shaquille Harrison & Coby White who combined for 77.3 FanDuel points in their recent match-up against Brooklyn.

I like the over in the NY/WAS game tonight and although I’m not rostering any Wizards in our FanDuel lineup, I like the Knicks duo of RJ Barrett  & Julius Randle.

Barrett brings some solid value with a price tag of just $5,000 and although he hasn’t put up monster performances as of late, he is putting up an average of 14.5 shots per game over his last 4 games.

Randle has been a double-double machine this season and that has certainly been the case as of late, putting up double-doubles in 5 of his last 6 games. The match-up agianst the Wizards is outstanding and I think he a safe floor of 40 points tonight with 60+ point upside.

We’re going to be paying up for the Rockets duo of James Harden & Robert Covington in their home match-up agianst the Timberwolves.

I’m a bit worried of the blowout risk, however, Harden should be able to feast agianst a Minnesota team that plays at a fast pace and I see Covington going off for a big game against his former team.

Jaylen Brown is still out for the Celtics which opens up some solid minutes for Gordon Hayward, who on FanDuel, is reasonably priced at just $6,100. Hayward went off for 24 points, 5 rebounds, 4 assists, 2 blocks, and 1 steal against Oklahoma City on Sunday and as I expect him to see 35 minutes tonight, I think he easily hits value.

Rounding out our team, we’re going to take a chance with the Grizzlies Josh Jackson in his match-up against the Orlando Magic. Jackson isn’t getting major minutes, but he is seeing about 20-25 minutes with both Jackson Jr.& Clarke out and has made the most of the opportunity going for an average of 30.95 FanDuel points per game over his last 4 games.