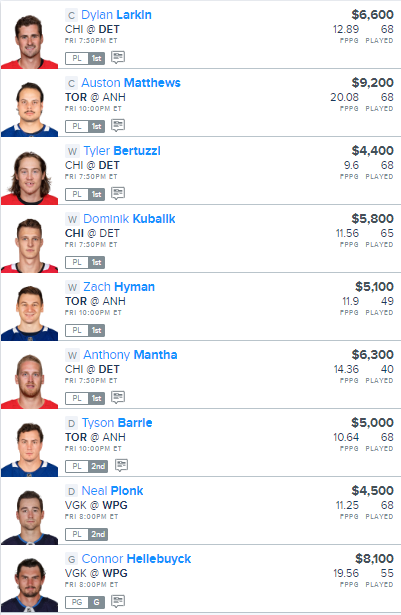 I’m back from my trip and ready to get us back in the winning circle tonight!

Kicking off our NHL lineup tonight, we’re going to be looking at a 3-man stack of Detroit Red Wings at home in their match-up agianst the Chicago Blackhawks.

It’s been a tough season for the Red Wings, but you have to like their match-up at home agianst the Blackhawks newly acquired goalie, Malcolm Subban who comes into this game with just a 3.17 GAA & .890 SV% on the season while allowing 5 goals in each of his last two starts with the Knights prior to being traded.

For the Red Wings, we’re going to go with an affordable stack of their top-line in Dylan Larkin, Tyler Bertuzzi, and Anthony Mantha.

Staying in this match-up, we wanted to get some exposure to the Blackhawks against a Detroit team that is ranked 30th in home goals allowed/game (3.44) and going to go with Dominik Kubalik who comes into this game with an impressive 29 goals & 16 assists on the season.

We’re also going to be paying up for a 3-man stack of Toronto Maple Leafs in their road match-up against the Anaheim Ducks. Toronto has had no trouble putting the puck in the back of the net on the road this season as the Maple Leafs come into this game ranked 1st in road goals/game at 3.49.

For the Maple Leafs, we’re going to roll with Auston Matthews, Zach Hyman, and Tyson Barrie.

Rounding out our team, we’re going to look at the Winnipeg Jets in their home match-up agianst the Vegas Knights. Vegas ranks just 17th in goals scored/game on the road this season (2.97) and I like pairing up both defenseman Neal Pionk & Connor Hellebuyck.