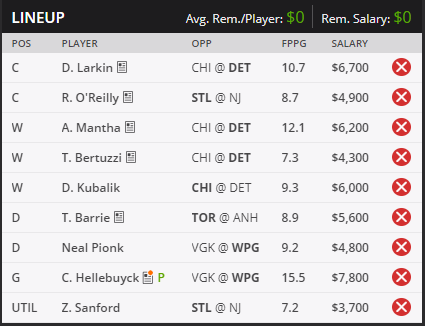 I’m back from my trip and ready to get us back in the winning circle tonight!

Kicking off our NHL lineup tonight, we’re going to be looking at a 3-man stack of Detroit Red Wings at home in their match-up agianst the Chicago Blackhawks.

It’s been a tough season for the Red Wings, but you have to like their match-up at home agianst the Blackhawks newly acquired goalie, Malcolm Subban who comes into this game with just a 3.17 GAA & .890 SV% on the season while allowing 5 goals in each of his last two starts with the Knights prior to being traded.

For the Red Wings, we’re going to go with an affordable stack of their top-line in Dylan Larkin, Tyler Bertuzzi, and Anthony Mantha.

Staying in this match-up, we wanted to get some exposure to the Blackhawks against a Detroit team that is ranked 30th in home goals allowed/game (3.44) and going to go with Dominik Kubalik who comes into this game with an impressive 29 goals & 16 assists on the season.

We wanted to get some exposure to the Toronto Maple Leafs and decided to get the vale with defenseman Tyson Barrie.

We have an affordable 2-man stack of St. Louis Blues in their road match-up agianst the New Jersey Devils. St. Louis has been on fire as of late, winning their last 8 games, and has been impressive on the road this season, posting a 17-11-5 record. The Devils have struggled this season and could be in for a long night as New Jersey is allowing 3.16 goals/game at home on the season.

For the Blues, we’re going to get some nice value with both Ryan O’Reilly & Zach Sanford.

Rounding out our team, we’re going to look at the Winnipeg Jets in their home match-up agianst the Vegas Knights. Vegas ranks just 17th in goals scored/game on the road this season (2.97) and I like pairing up both defenseman Neal Pionk & Connor Hellebuyck.