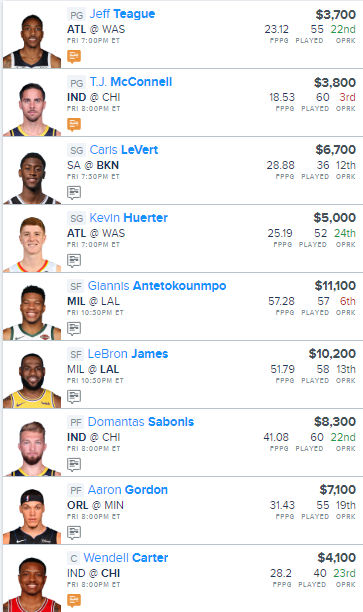 I’m back from my trip and let’s get back to our winning ways!

Kicking off our lineup tonight, we’re going to get some extreme value at our PG positions with Atlanta’s Jeff Teague & Indiana’s T.J. McConnell.

Trae Young has already been ruled out tonight for the Hawks, which means Teague should get the start in an outstanding match-up agianst the Washington Wizards.

Indiana’s backcourt has been riddled with injuries as of late, and with Jeremy Lamb out, Malcolm Brogdon looking doubtful, and both Victor Oladipo & T.J. Warren listed as GTD’s, there should be plenty of minutes for McConnell who had been very productive this season when he has seen minutes.

Caris LeVert continues to show us upside and has been the clear go-to option on the offensive end now that he is 100% healthy. LeVert has dropped two 60+ point performances recently and as I expect him to get up 15-20 shots tonight, I still think he is a bargain at just $6,700.

I’m going back to Atlanta for our other SG position, and rostering Kevin Hueter who should have a major increase to his usage rate with Young out and has been solid as of late, coming off games of 46.8 & 34.0 FanDuel points.

With all the value on the board, we’re going to pay up for both Giannis Antetokounmpo & LeBron James as they faced off against each other tonight in Los Angeles. I think this is going to be a game late which means both superstars will be seeing as many minutes as they can handle and both have 70+ FanDuel point upside tonight.

We’re going to continue to pay up at PF with Indiana’s Domantas Sabonis and Orlando’s Aaron Gordon.

As we already mentioned above, Indiana is banged up and could be without the majority of their backcourt tonight. Sabonis has been a double-double machine this season and as he has one of the better match-ups for PF’s agianst the Bulls, I think he is a must-play tonight.

Orlando has a nice match-up agianst the fast-paced Minnesota Timberwolves tonight and with Evan Fournier out, I think it opens up more usage for Gordon who is coming off a 52.2-FanDuel point performance agianst Minnesota at the end of February.

Rounding out our team, we’re going with the Bulls Wendell Carter who should see 25-30 minutes tonight and is priced too low at just $4,100 in a decent match-up against the Pacers.