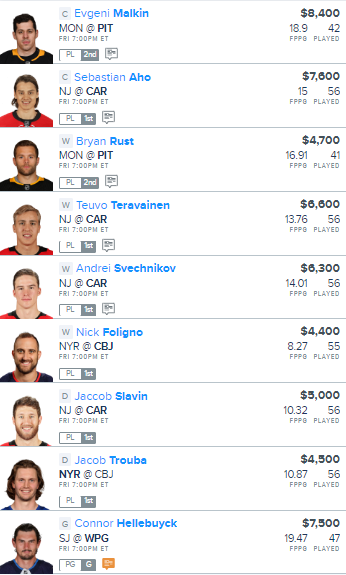 For our lineups tonight, we’re going to kick off with a 4-man stack of Carolina Hurricanes in their home match-up agianst the New Jersey Devils.

New Jersey is on the 2nd half of a back-to-back and has a tough task tonight facing a Carolina Hurricanes team which comes into this game with an impressive 18-9-1 home record. The Devils have struggled defensively on the road, allowing 3.52 goals/game, and as New Jersey will be starting Louis Domingue in net tonight, who has allowed 9 goals in his last two starts, I think the Hurricanes are in a great spot to put up 4-6 goals tonight.

The Pittsburgh Penguins have a solid match-up at home tonight against a Montreal Canadiens team that although has played well on the road this season, is banged up defensively and ranks just 26th in the NHL in shots allowed/game on the road (33.6).

For the Penguins, we’re going to go with a 2-man stack of Evgeni Malkin & Bryan Rust.

We have some nice value tonight in the NYR/CBJ match-up in the Rangers Jacob Trouba and Blue Jackets Nick Foligno.

In net, we’re going to go with Winnipeg’s Connor Hellebuyck in a nice home match-up agianst a San Jose Sharks team that has just a 10-14-3 record on the road while averaging just 2.41 goals/game.