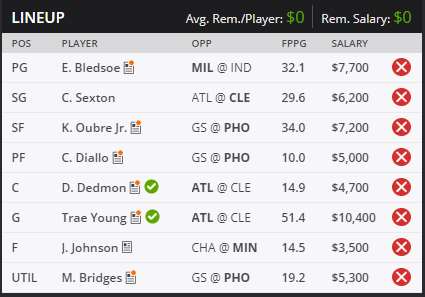 For our lineup today, we’re going to start with a 3-man stack of the Phoenix Suns in their match-up against the Golden State Warriors.

Golden State has been one of the better match-up for opposing teams this season as the Warriors come into this game ranked 21st in the NBA in points allowed/game and as the Suns are dealing with a ton of injuries in their front court, including to their star center Deandre Ayton, I think the Suns have some great stacking potential tonight.

For the Suns, we’re going to pay up for Kelly Oubre while getting some nice value with Cheick Diallo & Mikal Bridges.

With Giannis Antetokounmpo out against tonight, we’re going to once again fire up Eric Bledsoe.

We have a 2-man stack of Atlanta Hawks in both Trae Young & Dewayne Dedmon tonight in their nice match-up against the Cleveland Cavaliers.

Young gets a great match-up against Collin Sexton who is one of the worst defenders against opposing PG’s in the league while Dedmon will see the start tonight as the Hawks will need his size against Drummond & Thompson.

Staying in this match-up, we’re going with Cleveland’s Collin Sexton as he should be able to get what he wants offensively agianst Trae Young.

Rounding out our team, we’re going with James Johnson of the Minnesota Timberwolves who will be getting the start tonight with Karl-Anthony Towns unavailable.