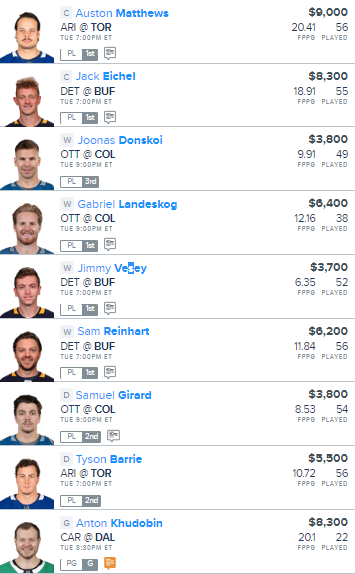 For our lineup tonight, we’re going to be focusing mostly on the Buffalo Sabers, Colorado Avalanche, and Toronto Maple Leafs.

The Buffalo Sabers get another shot at the Detroit Red Wings at home tonight after a 4-3 loss at less Thursday and although the top-line didn’t have a great night in their previous match-up, I have no hesitation going right back to them as Detroit enters this game allowing a league high 4.11 goals/game on the road this season while ranking just 29th in PK% (73.3%) on the road.

For the Sabers, we’re going to be going with Jack Eichel, Sam Reinhart, & Jimmy Vesey.

Colorado is going to be the chalk play of the night in their home match-up agianst the Ottawa Senators and current implied scoring total of 4.16.

With the great match-up and some adjustments to their top two lines due to the recent injury to Nazem Kadri, I like going with a 3-man stack of more of the value players for the Avalanche in Gabriel Landeskog, Joonas Donskoi, and Samuel Girard.

Toronto has been solid at home this season, averaging 3.43 goals/game, and although the match-up looks tough on paper, I like their changes agianst against an Arizona team on the 2nd half of a back-to-back.

For the Maple Leafs, we’re going to pay up for both Auston Matthews & Tyson Barrie.

In net, we’re going to pay up for the Stars Anton Khudobin in his home match-up agianst the Carolina Hurricanes. Dallas has been outstanding at home this season and although Khudobin has played most of his action on the road, in his 5 appearances at home this season, the veteran goaltender has posted an impressive 1.49 GAA & .941 SV%.