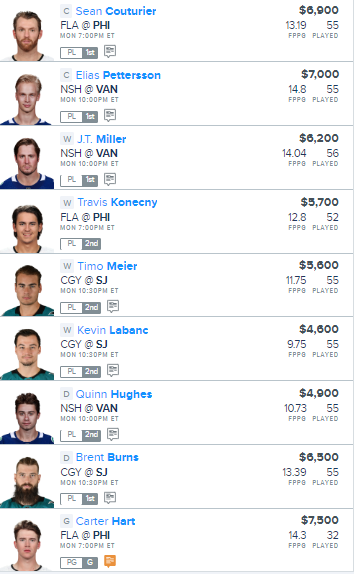 For our lineup tonight, we’re going to be focusing mostly on the Philadelphia Flyers, Vancouver Canucks, & San Jose Sharks.

Philadelphia has been outstanding at home this season, posting a 18-5-4 record, and has a decent match-up agianst the Florida Panthers.

Philadelphia has been solid scoring goals at home this season, averaging 3.48 goals per game, which currently ranks 6th in the NHL. Florida is a decent team, however, have had trouble keeping the puck out of the net on the road as the Panthers come in ranked just 22nd in goals allowed/game on the road at 3.31.

For the Flyers we’re going with a 2-man stack of Sean Couturier & Travis Konecny while also going with Carter Hart in net who in 17 games at home has posted a 1.69 GAA & .940 SV%.

Vancouver comes into tonight’s match-up with a solid match-up against a Nashville Predators team that has really struggled on agianst the power play on the road this season, as the Predators rank dead last in PK% on the road. Pekka Rinne looks like he is getting the start tonight which is great news for the Canucks as in his two games agianst Vancouver this season, Rinne comes in with a .786 SV% while allowing 9 total goals.

Rounding out our team, we’re going to go with a 3-man stack of the San Jose Sharks in their home match-up agianst the Calgary Flames.

The 2nd line for the Sharks has been very productive over the last few games and I like the value that both Timo Meier & Kevin Labanc bring to the table tonight. As we have some salary left over, I’m also going to spend up for Brent Burns who has average about 19 FanDuel points/game over his last four games.