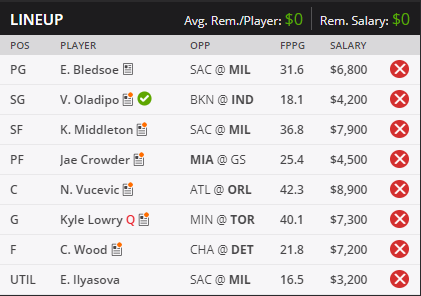 With that assumption, I’m firing up both Eric Bledsoe, Khris Middleton & Ersan Ilyasova who all have been outstanding when Antetokounmpo has been unavailable this season.

We’re going to get some nice value in Victor Oladipo of the Indiana Pacers. Oladipo has struggled with his shot since returning, however, as he saw 28 minutes in his last game as has put up double-digit shots in each of his last four games, I think he has too much value at just $4,200 to pass up on tonight.

Miami was able to add some veterans to their team for the playoffs and Jae Crowder certainly didn’t disappoint in his debut for the Heat, putting up a monster 45.75 DraftKings point performance in 34 minutes. As I expect that Heat to be cautious with Jimmy Butler and that he misses tonight’s game, I think Crowder has some of the best value on the slate in a nice match-up against the Golden State Warriors.

We’re going pay up for Orlando’s Nikola Vucevic as he has one of the best match-ups of the night as he faces an Atlanta Hawks team that has struggled against opposing centers on the 2nd half of a back-to-back.

Kyle Lowry was questionable earlier today, but it was just confirmed he will be taking the floor tonight and as I love the fast-paced match-up he has agianst Minnesota, I like his value at $7,300.

Christian Wood price continues to climb but I still think he has value, especially in this match-up against Charlotte. Wood has the ability to fill up the stat sheet in all categories and as he is now seeing 35-40 minutes with Andre Drummond gone, I think he tops 50+ DraftKings points tonight.