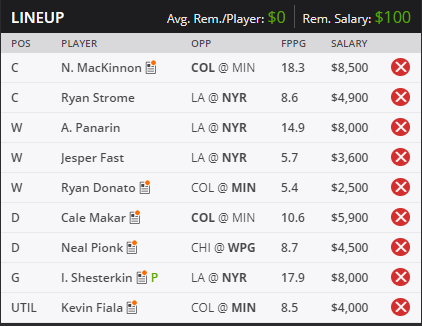 For our lineup tonight, we’re going to be focusing heavily on both the New York Rangers & Colorado Avalanche.

The New York Rangers have the best match-up on the slate in my opinion as they will be on their home ice agianst a Los Angeles Kings team that has lost 4 straight and come into this match-up with just an 8-20-4 road record.

The Rangers have been solid at home this season, especially on the offensive end of the ice, as New York currently ranked 5th in goals scored/game at home with 3.48.

I think New York has no problem reaching that average tonight agianst a Kings team that ranks just 25th in goals allowed/game on the road (3.44).

For the Rangers, were going to stack their 2nd line in Ryan Strome, Artemi Panarin, & Jesper Fast while also going with Igor Shesterkin in net.

Colorado might be on the road, but you still have to love the match-up against a Minnesota Wild team that although has played well at home, has had a disappointing season.

Colorado is one of the best offensive teams in the NHL this season as they come into this game with a 194 total goals and currently rank 4th in goals/game on the road at 3.43 game.

For the Avalanche, we’re going to pay up for Nathan MacKinnon & Cale Makar.

Staying in this match-up, I’m going to get some value with Minnesota’s Ryan Donato & Kevin Fiala.

Donato has averaged about 10.0 DraftKings points/game over his last five games and looks like he is going to join the 2nd line for the Wild tonight.

Fiala comes into this game with 12 goals & 21 assists on the season and has been lights out as of late, piling up 3 goals& 2 assists over his last three games.