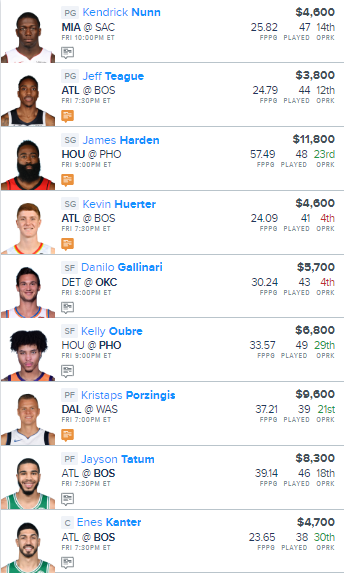 For our lineups tonight, we’re going to start with taking a look at the Boston Celtics as although it looks as if they’ll have both Kemba Walker (minutes limit) & Marcus Smart back in action, the Celtics have already announced that both Gordon Hayward & Jaylen Brown will be out tonight.

The Celtics have a great match-up at home agianst the Atlanta Hawks, and I’m going to want to get as much action as I can so I’m going with a 3-man stack of Marcus Smart, Jayson Tatum, and Enes Kanter.

Miami is not going to have Jimmy Butler available tonight so you have to like some of the other Heat options in a nice road match-up against the Sacramento Kings. We’re going to go with a 2-man stack of the Heat in Kendrick Nunn & Bam Adebayo.

Nunn seems fully recovered from an injury that saw him miss three games at the end of January and as he looks fully recovered and saw 35 minutes of action against the Clippers on Wednesday, I think Nunn has some of the best value on the slate at just $4,600.

Adebayo has been solid and consistent as of late as over his last three games, the big man has posted performances of 48.2, 47.1, & 47.3 FanDuel points. Adebayo should get some extra usage on the offensive end tonight with Butler out and as the Kings probably won’t have much size tonight as Dewayne Dedmon was traded and the newly acquired Alex Len hasn’t played since mid-January, I just don’t see who is going to be able to slow down Adebayo tonight.

With Andre Drummond no longer with the Pistons and Derrick Rose still out due to injury, Reggie Jackson will be relied on heavily tonight on the offensive end and although the match-up is tough, I think he still brings value at just $5,700.

Russell Westbrook is out tonight on the 2nd half of a back-to-back for the Rockets so we’re going to spend up on James Harden and get some value with Eric Gordon in the Rockets solid match-up agianst the Suns.

Rounding out our team, we’re going to stay in this match-up and pay up for Kelly Oubre for the Suns.