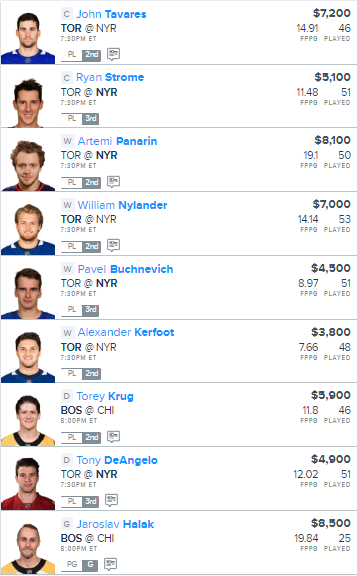 We have a small 2-game slate for tonight, however, we have plenty of offensive firepower to choose from between the Toronto Maple Leafs, New York Rangers, Boston Bruins, and Chicago Blackhawks.

Let’s start with the TOR/NYR game as we are going to want to get some solid action on both sides in this match-up. Both the Maple Leafs and the Rangers have struggled when it comes to goals allowed/game as Toronto comes in ranked just 25th (3.25) while the Rangers rank 23rd (3.22).

Both of the match-ups between these teams this season have been high scoring, as each game has combined for a total of 9 goals, and as I expect another big total in tonight’s game, I think it’s important to have more action in this game.

When it comes to the BOS/CHI game, as much as I like paying up for the top-line of the Bruins, I just think there is more value in the Toronto/New York game. I think you still can’t go wrong if you want to stack the Bruins, however, the top-line hasn’t been as explosive as of late and as their prices are still quite expensive, I’m staying away from the top line for the Bruins.

For Boston, I’m going to pay up for Torey Krug who is coming off a 4-point performance just two games and as he is part of the top power-play unit of the Bruins, I’m hoping that if the top-line does get a goal, that he is a part of it.

We’re going to completely fade the Blackhawks as we’re going to pay up for the Bruins Jaroslav Halak who is the clear cut top choice in net for tonight.