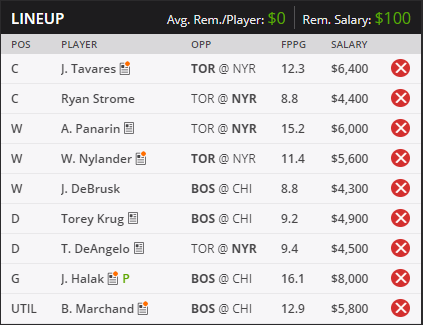 We have a small 2-game slate for tonight, however, we have plenty of offensive firepower to choose from between the Toronto Maple Leafs, New York Rangers, Boston Bruins, and Chicago Blackhawks.

Let’s start with the TOR/NYR game as we are going to want to get some solid action on both sides in this match-up, especially for the value that you can get for some of the top Rangers players compared to their pricing on FanDuel.

Both the Maple Leafs and the Rangers have struggled when it comes to goals allowed/game as Toronto comes in ranked just 25th (3.25) while the Rangers rank 23rd (3.22).

The match-ups between these teams this season have been high scoring, as each game has combined for a total of 9 goals, and as I expect another big total in tonight’s game, I think it’s important to have more action in this game.

For Toronto, I’m going with a 3-man stack of John Tavares, William Nylander.

With the value we save on DraftKings with our Rangers 3-man stack, we’re able to get more Bruins in our lineup and going to get a 3-man stack of Brad Marchand, Jake DeBrusk, and Torey Krug.

Although we’re not paying up for either Bergeron or Pastrnak, I still love stacking these three Bruins as Marchand & DeBrusk are just way to cheap at their current prices and all three of these players are part of the top power play unit for the Bruins.

We’re going to completely fade the Blackhawks as we’re going to pay up for the Bruins Jaroslav Halak who is the clear cut top choice in net for tonight.