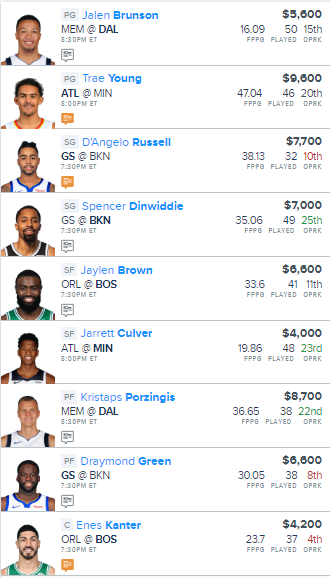 With the blockbuster trade from yesterday, it’s clear that the ATL/MIN game is going to be the top targeted game on today’s slate, especially on the Minnesota side.

Andrew Wiggins & Karl-Anthony Towns are going be highly owned tonight and although I think their solid plays, with the ownership being so high, I think this is an opportunity for us to separate ourselves from the other teams by fading both Wiggins & Towns.

We are going to want some exposure in this match-up and on the Hawks side, we’re not going to mess around and pay up for Trae Young who as much upside as anyone on this slate and can easily go for 70+ FanDuel points (which we’ve seen happen twice in his last five games) in this match-up.

For Minnesota, I’m going to go with the value in their outstanding rookie, Jarrett Culver, who has shown that he has 40+ FanDuel point potential and should see 30+ minutes tonight.

We have a 2-man stack of Dallas Mavericks in Jalen Brunson & Kristaps Porzingis in their great match-up against the Memphis Grizzlies.

Brunson burned us a few games ago, but with both J.J. Barea & Seth Curry already ruled out tonight, he should see 35 minutes and I think in this good match-up, he hits 6-8x value tonight.

Porzingis has been the go-to guy with Doncic out and I’m just not going to fade him in this good match-up as his price is still affordable for the usage rate he’ll have.

Russell has been cleared to play tonight and I can see a monster scoring performance from him tonight against his former team.

Staying in this match-up, we’re going to pay up for the Nets Spencer Dinwiddie. Everyone is going to be on Chris LeVert tonight for the value pick, but my money is on Dinwiddie as I think he still a value at $7,000, and I think he bounces back with a big game tonight at lower ownership then he should have with people going with Wiggins & LeVert.

Rounding out the team, we’re going with a 2-man stack of Boston Celtics in Jaylen Brown & Enes Kanter.

The Celtics don’t have the greatest match-up against the Orlando Magic, however, there is a bunch of value on the board with Kemba Walker, Marcus Smart, and Daniel Theis unavailable.

Brown in my opinion has the highest upside between the trio of Hayward, Tatum and himself and I’m expecting a big game from him tonight.

Kanter is one of my favorite plays of the night as he should see solid minutes tonight and I think he goes off for a 20 point, 15 rebound performance.