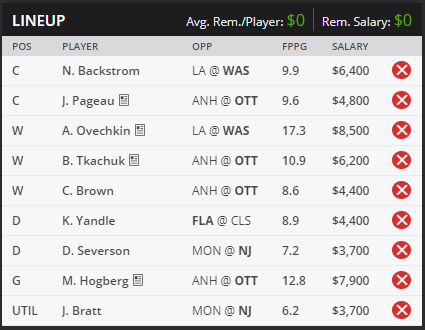 We have a huge slate tonight however, the most of our focus is going to be with the Washington Capitals and Ottawa Senators.

Washington comes into tonight’s games with highest implied total on the slate (3.69 goals) and that is not a surprise as they have a great match-up at home against the Los Angeles Kings.

Washington comes into this game with an NHL best 75 points and has been solid at home this season, posting a 15-7-4 record. The Capitals currently rank 4th in goals scored/game (3.58) and 9th in shots per game (32.2).

For the Capitals, we’re going with a 2-man stack in Nicklas Backstrom & Alex Ovechkin

Ottawa isn’t a team that we’ve targeted much this season, however, as we wanted to pay up for Washington, the Senators provided a solid value stack tonight in their home match-up agianst the Anaheim Ducks.

Ottawa comes into this game with just an 18-24-10 record on the season, however, the Senators have been solid at home, posting a 12-9-5 record. Ottawa is averaging 3.12 goals/game at home this season and has posted 3+ goals in each of their last three home games.

The match-up agianst the Anaheim is a solid one as the Ducks have really struggled this season, especially on the road as they come into this match-up with just a 9-16-2 record. Anaheim has really struggled offensively this season as they rank just 29th in goals scored/game (2.50), however, their defense has also not been that great as the Dukes rank just 19th in the NHL in goals allowed/game on the road (3.33).

For the Senators, we’re going with a 4-man stack of Jean-Gabriel Pageau, Brady Tkachuk, & Connor Brown while also going with some value in net with Marcus Hogberg.

We’re going with a pair of New Jersey Devils in Damon Severson & Jasper Bratt in their home match-up against the Montreal Canadiens. Both Severson & Bratt have averaged more than 3 SOG over their last 4 games and you have to like the match-up agianst Montreal’s Louis Domingue who comes into this game with a 3.57 GAA & .885 SV%.

Rounding out our team, we’re going with Florida’s Keith Yandle in his match-up against the Columbus Blue Jackets.