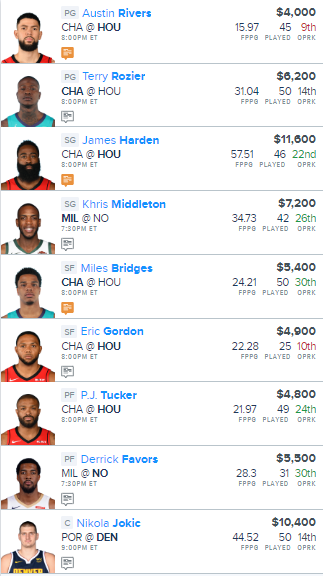 For our NBA lineup tonight, we’re going to be going straight to the CHA/HOU game.

Houston will be without both Russell Westbrook & Clint Capela tonight and with Mike D’Antoni likely running about a 7-8 man rotation tonight, I’m going with a full 4-man stack of Rockets tonight.

Houston is currently a 13.5-point favorite over the Hornets, however, I think Charlotte will be able to keep this game competitive and because of that, I’m going to go some value in both Terry Rozier & Miles Bridges who should have some success agianst Houston’s less than average defense.

Milwaukee has the highest implied total tonight against the Pelicans and I needed to get some action with the Bucks. I’ve decided to pay up for Khris Middleton who I think should easily hit 5-7x value in a great match-up against the New Orleans Pelicans.

Rounding out the team, I’m paying up for Denver’s Nikola Jokic who is coming off his best game of the season agianst the Detroit Pistons and I think can put up monster numbers agianst in his match-up against the Portland Trailblazers.