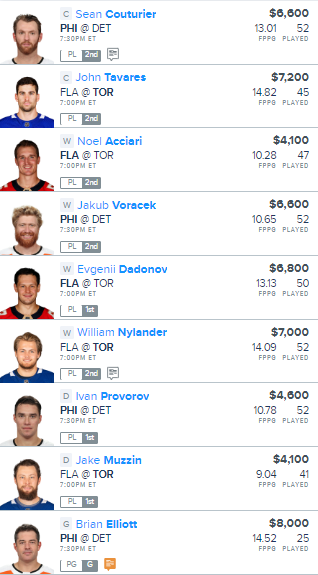 We have a small 3-game slate tonight and my focus is going to be majority on the FLA/TOR & PHI/DET match-ups.

Starting with Florida, I’m going to get some value with the Panthers with both Noel Acciari & Evgenii Dadonov.

Acciari has been a solid scorer for the Panthers this season as he comes into this game with 18 goals on the season and should see more time with the top-line with Aleksander Barkov out of the lineup tonight.

Dadonov has been a consistent producer for the Panthers this season with 23 goals & 17 assists and has posted 10.1+ FanDuel points in 14 of his last 17 games.

The Maple Leafs come in with the highest implied scoring total on the night, currently at 3.72 goals, and have been solid at home this season, posting a 13-6-7 record. Toronto ranks 10th in goals/game (3.38) and faces a Florida team that currently ranks just 25th in goals allowed/game (3.28).

Tavares hasn’t done much as of late, however, I like this match-up for him tonight and I think he breaks out of his recent slump with a 2-point performance tonight.

Nylander has been lights out as of late, averaging 20.4 FanDuel points over his last 7 games and I like paring him with Tavares as they are both on the 2nd line and top power play unit for the Maple Leafs.

Muzzin continues to have great value at just $4,100, especially as he has seen 20+ minutes of ice time over his last five game and has 8 SOG & 1 assist over his last two games.

Rounding out our team, we’re going with a 4-man stack of Philadelphia Flyers in their road match-up agianst the Detroit Red Wings.

Detroit is the worst team in the league, coming into this game with on an 8 game losing streak, and hasn’t been great at home, posting just an 8-17-2 record. Philadelphia has an implied scoring total of 3.56 tonight and I think they score 4+ goals tonight against a Red Wings team that is allowing a league high 3.83 goals/game.

For the Flyers, we’re going to go with Sean Couturier, Jakub Voracek, & Ivan Provorov while also going with Brian Elliott in net.