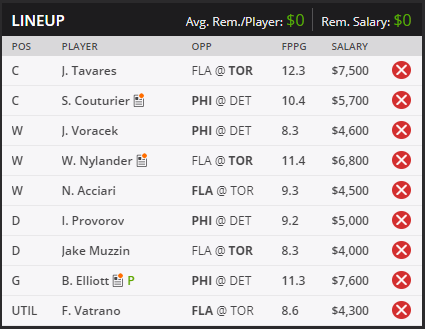 We have a small 3-game slate tonight and my focus is going to be majority on the FLA/TOR & PHI/DET match-ups.

Starting with Florida, I’m going to get some value with the Panthers in Noel Acciari & Frank Vatrano.

Acciari has been a solid scorer for the Panthers this season as he comes into this game with 18 goals on the season and should see more time with the top-line with Aleksander Barkov out of the lineup tonight.

Vatrano comes into this game with 27 points on the season (14 goals; 13 assists) and showed his upside recently with a hat-trick agianst the Blackhawks prior to the All-Star break.

The Maple Leafs come in with the highest implied scoring total on the night, currently at 3.72 goals, and have been solid at home this season, posting a 13-6-7 record. Toronto ranks 10th in goals/game (3.38) and faces a Florida team that currently ranks just 25th in goals allowed/game (3.28).

Tavares hasn’t done much as of late, however, I like this match-up for him tonight and I think he breaks out of his recent slump with a 2-point performance tonight.

Nylander has been lights out as of late, averaging 16.9 DraftKings points over his last 7 games and I like paring him with Tavares as they are both on the 2nd line and top power play unit for the Maple Leafs.

Muzzin continues to have great value at just $4,000, especially as he has seen 20+ minutes of ice time over his last five game and has 8 SOG & 1 assist over his last two games.

Rounding out our team, we’re going with a 4-man stack of Philadelphia Flyers in their road match-up agianst the Detroit Red Wings.

Detroit is the worst team in the league, coming into this game with on an 8 game losing streak, and hasn’t been great at home, posting just an 8-17-2 record. Philadelphia has an implied scoring total of 3.56 tonight and I think they score 4+ goals tonight against a Red Wings team that is allowing a league high 3.83 goals/game.

For the Flyers, we’re going to go with Sean Couturier, Jakub Voracek, & Ivan Provorov while also going with Brian Elliott in net.