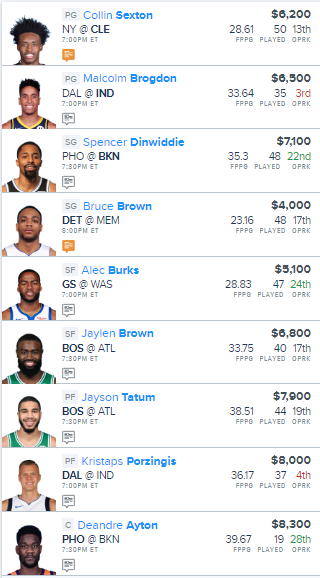 For our FanDuel lineup, we’re going to kick it off with some decent value at the PG position in both Collin Sexton & Malcolm Brogdon.

Reggie Jackson looked like to be the chalk play of the night when the Pistons ruled out Derrick Rose earlier today, however, as Jackson now is considered questionable to his back, I just don’t think you can take the chance rolling with him. Jackson missed considerable time due to a stress reaction in his back and considering the Pistons are on a back-to-back with Jackson playing 34 minutes yesterday, I don’t see the Pistons taking a chance with him.

Sexton has been outstanding as of late, as over his last 9 games, he is averaging 38.8 FanDuel points in 34 minutes per game.

Brogdon is back from his injury and has looked good in his last two outings, going for 31.4 & 44.1 FanDuel points. Brogdon could be in line for some extra usage tonight with TJ Warren out of the lineup.

Spencer Dinwiddie will be a popular play on tonight on FanDuel as his salary is a very reasonable $7,100 and we know he has going to have some nice usage in a good match-up agianst Phoenix with Kyrie Irving out.

As I mentioned about, with Derrick Rose already out and with Reggie Jackson & Svi Mykhailiuk questionable, Bruce Brown has some of the best value of the night as he is probably is going to get all the minutes he can get in a nice match-up against the Grizzlies.

D’Angelo Russell has already been listed out for tonight which means that I’m getting Alec Burks in the lineup in what could be a high scoring affair against the Washington Wizards.

Both Kemba Walker & Marcus Smart are out of the lineup for the Celtics tonight so I’m going to pair up both Jaylen Brown & Jayson Tatum in their nice match-up against the Atlanta Hawks.

Kristaps Porzingis should see 35+ minutes tonight against Indiana and with both Doncic and Curry out, he should see 15-20 shots tonight.

Rounding out the team, we’re paying up for the Suns Deandre Ayton in the Suns solid match-up agianst the Brooklyn Nets.