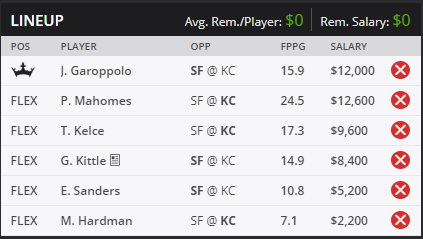 It’s the biggest day of the year for the NHL and we got an exciting match-up today with the Kansas City Chiefs taking on the San Francisco 49ers.

Let’s take a look at who we got going for our NFL DraftKings “NFL $4M Super Bowl LIV Millionaire” lineup that starts at 6:30pm (EST).

I’m going to try to find a way to differentiate my team from others and although it’s risky, I think I’m going to fade the RB’s on both sides of the ball.

Kansas City has struggled defending the run all season and we all saw what San Francisco has done on season on the ground, however, I find it hard that Chiefs aren’t going to do everything possible to put the game in Jimmy Garoppolo’s hands. On top of the fact that Tevin Coleman looks active and it’s always hard to really know how the timeshare will be in the 49ers backfield (although you have to imagine Mostert see the bulk of the carries after his game agianst Green Bay), I’m comfortable enough in fading the 49ers rushing attack.

As for the Chiefs, Damien Williams has been outstanding, especially as a receiver in the backfield, however, the 49ers have been the best against opposing RB’s all season and that has been no different in the playoffs as San Francisco has shut down both Devin Cook & Aaron Jones and I think will limit the damage done by Williams.

As we’re fading the running games, it means we’re hoping that both teams air it a bunch tonight.

Starting with the Kansas Chiefs, we’re not going to mess around and we’re going to pay up for Patrick Mahomes. Mahomes has been incredible this post season and although the 49ers defense has been great this season, we’ve seen them give up some yards through the air, especially when Drew Brees put up 349 yards & 5 TD’s against them in their 48-46 victory.

Pairing up with Mahomes, I’m going to pay up for Travis Kelce and go with some value in the speedster, Mecole Hardman.

For the 49ers, I’m going with Jimmy Garoppolo as our Captain pick tonight.

I feel that Chiefs are going to load the box to slow down the 49ers rushing attack and that there is a high probability that San Francisco will be playing form behind, if the 49ers stand any chance, they’ll need their franchise quarterback to have a monster game.

Kittle hasn’t had to be utilized much in the passing attacks with the success of the 49ers rushing attack, we all know that he is as good as a receiver as the is run blocker and as the Chiefs have struggled against opposing TE’s on the season, I think we see Kittle have a big game and has a multiple TD performance.

Sanders I think is great value and although Deebo Samuel has become more of the top WR threat for the 49ers, I think this will lead to a lot of single coverage for Sanders and that he has the real potential for a big game.

Good Luck and enjoy the game!