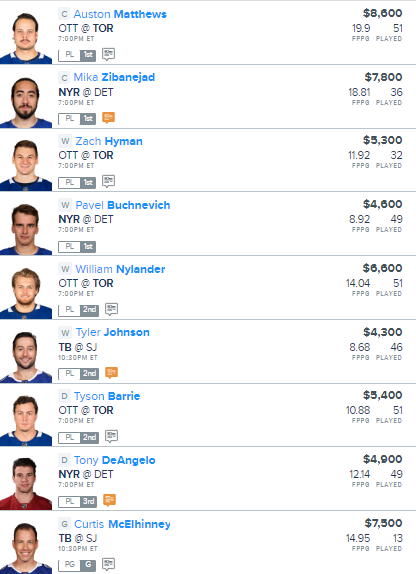 Keeping this one short tonight as we have some friends coming over to watch the Bruins game!

For tonight’s lineup, we’re going to have a heavy focus on both the Toronto Maple Leafs & New York Rangers.

Toronto has an outstanding match-up at home agianst the Ottawa Senators tonight who come into this game with just a 6-15-4 record on the road and ranked 4th in goals allowed/game on the road this at 3.72.

For the Maple Leafs, we’re going to go with a 4-man stack of Auston Matthews, Zach Hyman, William Nylander, and Tyson Barrie.

The New York Rangers will face the Detroit Red Wings on the 2nd half of a home and home series. The Rangers has a solid night last night in their 4-2 victory and I expect more of the same tonight as Detroit comes into this game ranked dead last in goals allowed/game at 3.88.

For the Rangers, we’re going to go with Mika Zibanejad, Pavel Buchnevich, and Tony DeAngelo.

For some value at our other wing spot, we’re going with Tampa Bay’s Tyler Johnson. Johnson comes into this game with a respectable 12 goals & 13 assists on the season and I like his value as he is part of the 2nd power play unit for the Lighting.

In net, we’re staying with Tampa Bay and going to go with some value with Curtis McElhinney.